Ryan Mizzen is the author of the new children's picture book Nanook and the Melting Arctic, the second in his Time to Care series, which began with Hedgey-A and the Honey Bees. He is based in the UK.

Q: Why did you focus on the Arctic in this second book in your Time to Care series?

A: One of the main themes I’d like to address throughout this series is the climate crisis. The Arctic is warming at one of the fastest rates on the planet as a result of climate change. It’s a place where the climate crisis is very visible through extreme weather and melt events which are taking place on a frighteningly regular basis.

The Arctic may sound distant and irrelevant to many people. But what happens in the Arctic will affect the rest of the world.

The renowned polar scientist Peter Wadhams makes this clear in his book A Farewell to Ice. He explains that when the Arctic becomes fully ice free, “The albedo change from the loss of the last 4 million km2 of ice will have the same warming effect on the Earth as the last twenty-five years of carbon dioxide emissions.”

We’re well on track to have these ice free summers occurring before 2050. This is the magnitude of change which we’re staring down in the Arctic.

Q: Did you need to do much research to write the book, and did you learn anything that surprised you?

A: Since completing my Bachelor of Science degrees in Climate Change, I’ve tried to keep up with developments in the field of climate science. But there are some very worrying events taking place in the region.

For example, in summer 2017 there was a wildfire that lasted for around two weeks in Greenland – a region we usually associate with ice. In 2019, there were over 100 wildfires in the Arctic. This year has also seen large wildfires in Siberia, with wildfire smoke extending all the way to the North Pole and blanketing large parts of Russia. 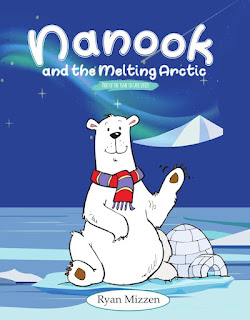 While many countries and corporations are looking greedily towards Greenland to exploit its oil and mineral wealth as the ice melts, there’s serious concern about what that ice melt will mean for the rest of the world.

It’s estimated that if all the ice melted on Greenland, it could raise global sea levels by seven metres, thereby inundating coastlines. While this may not happen for some time, there are some disturbing things happening on Greenland.

A: There are a few things I hope children will take away.

The first is that the world is interconnected. When we damage one part of the climate system it has wider repercussions.

Secondly, a crucial part of the book was where the animals used beach plastic to protest at the leaders’ meeting. This is a nod to Greta Thunberg and the Fridays for Future movement.

For many years it felt like the climate movement was waning. But then along came Greta, and people of all ages including young children are now protesting in their millions for political leaders to address the climate crisis.

I also believe it’s important to show that working together can achieve results and that’s why Nanook and the animals worked together to convince the leaders to act.

History has shown countless times that humanity can work as one to address global issues such as the hole in the ozone layer. There’s no reason why we can’t do the same thing again. What we lack is the political will to implement some of the major structural and policy changes required. So by working together, we can put pressure on leaders to act.

Finally, the book is dedicated to the UN Patron of the Oceans Lewis Pugh. It also features illustrations of Greta Thunberg and Dr. James Hansen. My hope is that educators, parents and guardians research any of these names if they’re unfamiliar as they’ve all played a pivotal role in bringing the climate crisis to the world’s attention.

A: I’m working on my first cli-fi (climate fiction) adventure novel. I believe that fiction plays a crucial role in communicating challenging topics to a wider audience.

Cli-fi is a fairly new literary subgenre. Many cli-fi novels are dystopian and set in the future. I believe there is a need for more cli-fi books grounded in the present, which show how we can make positive changes now while we still have time to act. That’s what I aim to show in my books including Nanook.

One of the best examples of this new wave of cli-fi is The Last Bear by Hannah Gold, which I highly recommend.

A: Nanook and the Melting Arctic is available for purchase on Amazon’s global stores, including:

I’m grateful to my illustrator Paul Winward for the amazing illustrations once again. Also to my friend and editor Eirini Dermitzaki for assistance editing the book. More information about Nanook can be found on my website: www.ryanmizzen.com.