Saumya Roy is the author of the new book Castaway Mountain: Love and Loss Among the Wastepickers of Mumbai. A journalist and social entrepreneur, her work has appeared in a variety of publications, including Forbes India and Bloomberg News. The co-founder of the nonprofit Vandana Foundation, she is based in Mumbai, India.

Q: What inspired you to write Castaway Mountain?

A: I trained and worked as a journalist in the United States and Mumbai. Then I left journalism to start a micro finance nonprofit in 2010.

Some years later, waste pickers who trawled the garbage mountains at the far end of the city for trash to resell began asking for our low-interest loans. I followed them back to the mountains, worried that their odd businesses would make our loans go bad.

In early 2016, enormous fires had erupted on the garbage mountains, engulfing the whole city in smoke. Waste pickers were being detained by police for lighting these fires.

I thought of writing a magazine story to illustrate that our partly consumed things made these mountains, which were as tall as 18-floor buildings! I wanted to show that this was a world in itself, made by our growing consumption, a world that the waste pickers lived and made their lives in.

Q: The book includes a large cast of characters, but one of the main figures is Farzana. How did you meet her, and did you know from the beginning that you'd focus on her? 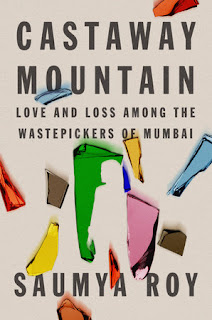 A: I reported almost equally on all the characters, but some of their parts were cut during the editorial process.

Farzana became the main character because she was born at the foothills of the mountains. We see her as a child and watch her grow on the slopes. With her we see the light and joy and intrepidity that pickers bring to this dark place.

We also see the imprint of the growing garbage mountains in her. It is a lingering, troubling imprint.

Q: What especially surprised you as you researched the book?

A: So much surprised me!

One of the many surprises was to learn that these dumping grounds were established during a plague epidemic in 1897.

That epidemic had also emanated from China, it had also led to stringent quarantine measures that residents opposed. Eventually British administrators had decided to create these distant dumping grounds and a train line to carry trash there, pushing garbage and the diseases that came with it to the far edge of the city.

With our own pandemic too, some Covid waste has been dumped there.

A: I hope they feel a visceral connection to the characters and the world they inhabit.

While it may at first seem distant and different, people and bonds are alike everywhere. Readers will find giggly teenage parties, festival celebrations, gang rivalries - echoes of their own lives and communities - here too.

A: I am working in a few journalistic stories that follow strands from my reporting for the book. This includes stories on the export of waste from the US and UK to India and another one on the enormous amount of plastic waste left behind by the Covid-19 pandemic.

A: Mumbai is among the wealthiest cities in the world. The remains of this wealth create this growing waste, much like in Western cities. This book takes you into this world created by our waste. It is filled with real-life characters who I hope readers will love as I came to love them.