Alex London is the author of Battle Dragons: City of Thieves, the first in a new middle grade series for kids. His many other books include the Dog Tags series. He lives in Philadelphia.

Q: How did you create your character Abel and the city of Drakopolis?

A: Drakopolis came from the basic premise "what if there was a city built around dragons?" The urban planning implications of that were pretty astounding and I'm having a lot of fun exploring them in the series.

I used Venice as one jumping off point, substituting dragons for gondolas and the open air for the canals. It was helpful to think that way, in terms of how and where the dragons would "dock."

And then, as someone who is passionate about cities, I looked to the world's current megacities for inspiration as well. I'm forever awed by the genius of city dwellers to adapt and build communities in so many diverse settings with so many resource disparities.

Drakopolis, like any city, has its wealthy and its poor and its working class and they're all doing their best to get by...with the added pressures of dragon riding gangs and dragon riding secret police! 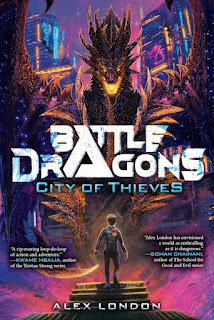 As for Abel,  I began knowing a little about him, but I let the story teach me who he was (at least in the first draft).

I knew he was a boy with some big passions and big insecurities, a boy who wants to be a good friend and good sibling and a good son, but is still figuring out what all that means, and a boy who, like me and so many people, deals with anxiety and some other mental health struggles.

I wanted to create a hero who gets to ride dragons, but who deals with very authentic emotions that young people in our world deal with too. Readers, I've found, will follow an author into any fantasy world they can dream, as long as the story never comes unleashed from emotional truth.

Q: What do you think fascinates people about dragons, and do you have any other favorite books about them?

A: Dragons are power, and power doesn't tend to change people or communities, it tends to reveal them. I think dragons are amazing tool for testing and revealing what a person, what a community, and what a society values. If you really want to know someone's heart, give them a dragon and see what they do.

As to dragon books I love, Ursula Le Guin writes amazing ones in the Earthsea series, and I'm also truly astounded by Naomi Novick's Temeraire series, about dragons in the Napoleonic wars.

A: I thought I knew, but it changed a bit as I wrote and as Abel revealed himself to me and as his relationship with "his" dragon evolved. I don't want to say more for fear of spoilers, but the ending contains the thematic heart of the whole series, in my mind.

A: In the first draft, I invented a lot of flavors of Kit Kats, but alas, I ended up having to change it to a made-up Drakopolis world candy in the end (Wyvern Wafers).

Still, the suggestion is there. I hold out high hopes of getting free Kit Kats in unusual flavors one day as brand ambassador. I'm not above shameless product placement for the sake of free chocolate candy.