Mark Piesing is the author of the new book N-4 Down: The Hunt for the Arctic Airship Italia. His work has appeared in a variety of publications, including The Guardian and The Economist. He lives in Oxford, England.

Q: In the introduction to N-4 Down, you write about finding an old book in a secondhand bookstore. How did your discovery of that book contribute to your writing this one?

A: I knew very little about the events of N-4 Down until I picked up that book. It was just so incredibly mysterious.

It was over 90 years old, written in 1930 by a U. Nobile just after the events it described and was an eyewitness account of the crash of an airship at the North Pole. I didn't know who U. Nobile was or that airships had ever flown to the North Pole.

Then when I was looking through the book, an even older newspaper cutting fluttered out. Scrawled at the top in pencil was 1928, below was the headline “Bound for North Pole,” and the cutting was about Commander Nobile’s first flight in great Arctic adventure.

Then a map at the back unfolded, and right at its centre was Spitsbergen, the old name for the Svalbard archipelago, and I knew I had to go there. When I few into Svalbard on a Boeing rather than an airship, I realised that I had to write this story, and one of the main characters was the archipelago itself.

I am a massive fan of Philip Pullman's Northern Lights trilogy. It struck me that Nobile's adventures had to have been one of the inspirations for Pullman's story. Regrettably, I haven't yet had the chance to discuss this with him.

Q: How well known was Umberto Nobile in his day, and what do you see as his legacy today?

A: The first part is easy to answer. The second, a lot harder!

In the aviation industry, Umberto Nobile was very well known as one of the leading airship designers of his day. His airships, built at his factory in Rome, were exported to countries like Britain, Spain, and the United States.

Nobile was one of the Roma designers, a United States Air Force digrible that tragically crashed in 1920. He went on to work as a consultant with Goodyear, working on the precursors to their famous Blimps.

Then the 1926 transpolar airship flight with the famous if elderly Roald Amundsen turned him into a celebrity. The flight was considered at the time one of the most outstanding achievements in aviation. The New York Times devoted three full pages to it, and he was met by crowds of people as he journeyed across the United States.

He was even called "The New Columbus" at that time. I appreciate it may have different connotations today.

The crash of the Italia, rumours of cannibalism, and his decision to abandon his men on the ice propelled him to a new level of celebrity in a way. When he was seriously ill in 1933, The New York Times even printed his obituary while he was still alive and went on to recover. 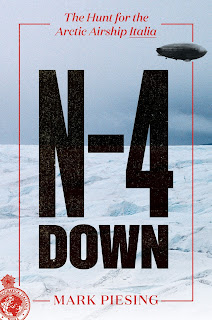 The hard part is his legacy today. Across Europe, there are plenty of streets named after him! Ironically, his 1926 flight is largely forgotten outside of Italy. If he is remembered at all, then it is for the 1928 crash of the airship Italia.

I think his legacy is tragic: the crash of the airship Italia helped to speed up the demise of the airship as a means of passenger transportation, and the disappearance of Roald Amundsen on the way to rescue in 1928 created one of the greatest mysteries of the Arctic.

A: To research N-4 Down, I tried to travel to as many of the locations I mention in the book as possible and discover manuscripts that other writers had forgotten. I have two young children, so sadly that wasn't always possible.

I spent an incredible two days interviewing Ove Hermansen in Copenhagen. In 2018 Ove was one of the last surviving friends of Umberto Nobile and had been his representative in Scandinavia. By spending that length of time with him, I felt that I was close to Nobile himself. Sadly, he passed away a year later. The only thing I didn't do was to find an airship to fly on!

I was surprised by the willingness of aeronauts to casually risk their lives in the pursuit of glory. I couldn't believe that they would fly aircraft untested in the Arctic or take off without a radio when one was coming. I think these risks were perceived differently by a society where children were lucky to make it through to adulthood, and men were mown down on the battlefield.

Another surprise was by the power of the Arctic to bore into your soul. As I said in my The Explorers Club talk, I couldn't understand why these men and women were obsessed with returning to the Arctic until I visited there myself. I just want to go back!

A: I hope they take away from N-4 Down an appreciation that in polar exploration, the aeronaut was as important, if not more important, as the explorer crossing the ice on foot or on a sledge.

The way technology is adopted isn't inevitable. With a little more luck, there may still have been airships flying over Oxford, or New York, as there once was, and Northern Lights was less fantasy and more reality.

A: My latest piece for BBC Future has just gone up on their site. It is a long read called The Planes That Conquered Antarctic. It's about the important role that some of the minor characters in N-4 Down play in opening up Antarctica and aviation's continuing role on the frozen continent.

I am working on the proposal for my next book, which I can't say anything about at the minute!

A: N-4 Down is currently a bestseller in the History of the Arctic and Antarctic, and Aviation History, on Amazon.com. So go out there and buy N-4 Down. You won’t regret it.