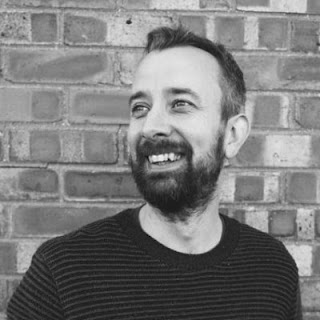 Owen Nicholls is the author of the new novel Perfect Timing. He also has written the novel Love, Unscripted. He lives in Norfolk, England.

Q: What inspired you to write Perfect Timing, and how did you create your characters Jess and Tom?

A: I was inspired by a couple of things. First was a deeply unromantic conversation me and my wife had about whether or not we’d have made it as a couple if we’d have got together earlier in our lives. We both had to admit it was pretty unlikely.

When you’re young – as Tom and Jess are at the start of the novel – you have so much to work through, so many mistakes to learn from. Me and my wife went through that in our early 20s and it helped us become who we were when we got together.

Second, in a very similar way to my first novel Love, Unscripted, I wrote this story because I wanted to live vicariously through its characters and strip away some of the artifice around the world in which it was set.

With Love, Unscripted, it was both a straight-up meet-cute and a heavier dissection of what happens when a relationship sours.

With Perfect Timing I really wanted to enjoy being in the world of comedy and live music (two things I wish I had the guts and skill to do, but alas...) while also showing that once you make it, once you have success, it doesn’t solve any of the problems you have deep down.

As for creating Tom and Jess, as usual, there’s plenty of me in both of them. Especially their worse moments. 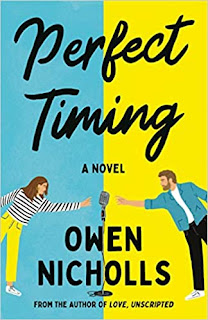 I also reached out to comedians and musicians to get some of the “showbusiness” stuff right. I found it easiest to get inside their creative minds and especially Tom’s “WHAT IF” worries because that’s pretty much what writers do all day long. It’s our job to ask, “WHAT IF?”

Q: The Kirkus Review of the book says, "Nicholls isn’t afraid to let Tom and Jess get mean and deal with personal tragedy...giving the story a realism that anchors the lighter aspects of their romance." What did you see as the right blend between serious and light-hearted in the novel?

A: That’s a great question and was probably the biggest struggle I had while writing Perfect Timing. I think my sensibility is to want to go a little darker. I never want to write something that says “Love fixes everything.” I think that’s a dangerous message to sell.

BUT I do believe love’s such an important part of who we are. Finding the right person at the right time, someone to share your life with, it can make everything make sense. I just think you should make sure you’re as happy as you can be with yourself first. I wanted that for Tom and Jess before they could be together.

The Kirkus Review also called it a novel about “growth and understanding.” That meant a lot to me. I always wanted it to be a pro-therapy, pro-mental health novel. Both main characters do plenty of self-reflecting and make some tough choices. They say no, rather than go all in on instant gratification. I’m weirdly proud of them for that.

A: The first draft was much darker than the final version and I’m glad I jettisoned some of the heavier moments in the edit. I was relying on too many “big set-pieces” to get Jess and Tom where they needed to go.

Stepping back I realized it’s more true that lives change in the smaller moments. The times we step back and say, should I go this way or should I go that way?

There’s real power in stopping yourself walking down a road you thought you wanted.

A: I’m a huge fan of Holly Bourne. She’s mostly known for her YA and she’s written two books for an older audience. The most recent, Pretending, is exceptional. She balances the serious and the light with absolute expertise.

I’ve very recently fallen in love with Emily St. John Mandel’s work, with Station Eleven instantly becoming one of my all-time favorites. I read it twice during lockdown. Similarly, anything by Laura Lippman is a reason to celebrate.

My most recent recommendation is Georgia Pritchett’s My Mess Is a Bit of a Life. It’s funny, heartbreaking and smart. Every word is golden.

A: I’ve always enjoyed switching my writing between scripts and novels.

I’m currently working on a TV show about forgiveness. It’s a little bit noir, a little bit procedural, and a little bit bonkers. But I’m proud of it. It’s asking questions about redemption and remorse and where the line is between owning your mistakes, saying sorry and being able to move on.

A: I’m about to start mentoring in the UK as part of a scheme set up by the National Centre for Writing. It’s a course I was accepted on before I was published, so it’ll be great to sit on the other side of the table and hopefully guide someone to the success I’ve had.

One subject we’ll probably discuss is what success actually looks like. For me, it’s about having books on shelves that readers can enjoy. That’s it. As long as people get the opportunity to read what I’ve written I’m happy. So, with that in mind, go buy Perfect Timing so I can keep doing this!