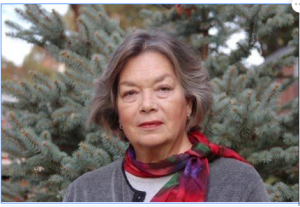 Ann Slayton is the author of the new book Accidental Grace: Selected Poems & Prose. Her other books include Catching the Light. She is a founder of the Washington Women's Arts Center, and she lives in Takoma Park, Maryland.

Q: Over how long a period did you write the poems and other pieces in Accidental Grace?

A: A number of these poems were first published in my two chapbooks, The Music Beginning Here (1984) and Catching the Light (2001). The prose pieces and some of the narrative poems are more recent.

In considering the poems for Accidental Grace, my first full-length book, I’ve revised some of the original versions, paying attention to such things as pacing of the lines and cadences.

I’ve also done a certain amount of decluttering, for instance, of adjectives, wordiness, and unnecessary commas, which can slow down the lines and interfere with the flow of the poem.

Q: How did you decide on the order in which the pieces would appear in the collection?

A: While I’ve written poems in the first person “I”—particularly the early poems—many of the poems in Accidental Grace take on different voices, fictional and nonfictional; some imaginary, some that speak from my family history, some from literary and historical figures.

I wanted to find an order for the book in which all could live together harmoniously, and the book would be cohesive. The challenge arose not just with work done over many years, but was complicated by including prose pieces.

By dividing the book into sections, the reader has a place to pause, like an intermission between pieces of quite different tones. For example, the prose piece “Nothing Again is Happening,” a dialogue between the narrator’s two selves, foreshadows the different tonal elements in the poems that follow. 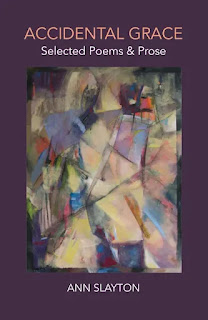 A: Years ago in first reading William Wordsworth’s “Ode: Intimations of Immortality,” I was struck by his words “accidental grace” in a stanza that serves as epigraph to the poem.

Immediately a contemporary interpretation struck me: that while Nature in its great power of bringing forth and nurturing growth was a female force, Man, an “accidental grace/ His hour being not yet come,” can be interpreted differently today.

In my view, “Man” applies more literally to men, not to the categorically “human,” i.e. men and women, as was Wordsworth’s intended meaning, and customary in the language until very recently.

What this distinction signifies to me is that we are on the cusp of a radical, perhaps evolutionary, revisioning of values and power, one that brings the particular qualities associated with the female into the center of our social, political, and psychological worlds.

Many of the poems in Accidental Grace imply this ascendance. In choosing "accidental grace" for the book's title, I understood that the words can easily characterize acts of profound change as well as acts of imagination, essential to all human creativity. And of course for me, the poems themselves are an accidental grace.

Q: How did you choose the various people and entities that you feature in your work, including poet Anne Bradstreet and the daughter of The Scarlet Letter's Hester Prynne?

A: I have always been drawn to accounts—actual and fictional—of female courage, especially stories that have emerged from our country’s early history.

Hester Prynne of Hawthorne’s Scarlet Letter is a woman who with enormous dignity walks a fine line between the villagers’ admiration and revilement for having given birth to a daughter out-of-wedlock.

The bond between Hester and her daughter Pearl is understandably intense, and in my poem, “The Spell,” the minister’s momentary usurpation of that bond I imagined could have a lasting impact on Pearl.

I have also been drawn to accounts of “firsts,” and Anne Bradstreet was the first female poet from the American colony whose work was published, albeit in England. I first became aware of this through John Berryman’s long poem, “Homage to Mistress Bradstreet.”

A: In some of my works, I have tended to personalize these accounts of courageous women in our early history, as my own family history in America dates back almost to their times in the mid-17th century, and I have imagined how the ordinary, difficult lives of my ancestors must have taken much courage.

A: I have a collection of about a dozen prose pieces called “Wandering Women” which I started writing on a solo trip out West. I encountered numerous women on their own and their stories of their lives were as disparate, heartwarming, fearsome, courageous, and troubling as any I have imagined. This is still a work in progress.

I have also taken to watercolor painting in the last 10 years—in some respects, a respite from words!—and with the particular pleasure of gathering weekly during summers in Northern Vermont with other artists to paint, draw, and discuss our work.

A: I’ll mention that you can read a few of the poems in Accidental Grace on the Dryad Press website: https://dryadpress.com/shop/accidental-grace-selected-poems-and-prose-by-ann-slayton/