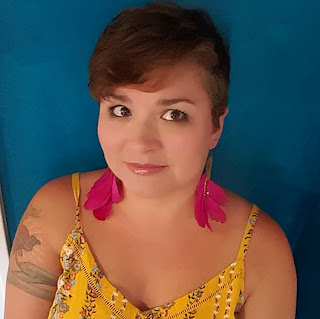 Michelle Ruiz Keil is the author of the new young adult novel Summer in the City of Roses. She also has written the YA novel All of Us with Wings. She lives in Portland, Oregon.

Q: What inspired you to write Summer in the City of Roses, and how did you create your characters Iph and Orr?

A: I’d been fascinated with the fairy tale Brother and Sister for a few months and had been very interested in Greek myths about Iphigenia and Orestes for years, but the idea came together when I was applying for a writing residency.

One of the questions was about the project I’d be working on while there. I had just finished a final editing pass on my first novel, All of Us with Wings, and wasn’t sure what to work on next.

I just wrote something like, “a mashup of the Grimm fairy tale Brother and Sister and Greek myth about siblings Iphigenia and Orestes set in the riot grrl scene in early '90s Portland.” Then I realized—yes, I really want to write that!

Q: As you mentioned, the novel is set in 1990s Portland. How important is setting to you in your writing?

A: Setting and period are both very important to me. In my first novel and in Summer in the City of Roses, I wrote a version of a city that is mostly lost at a time right before huge changes take place.

I think that is very potent, especially for a coming-of-age story. A big part of transformation for any character (or person, I think) is what they notice, what is important to them. A new place or an old place in a new context is magical in that regard. 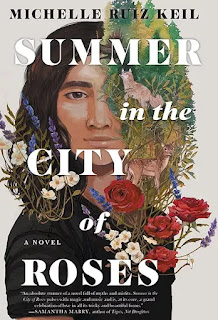 In the case of the ‘90s Portland setting, there was shabby lushness, an imperfect coziness—dandelion gardens and unpruned roses, paint peeling from pretty old houses--and the art, grassroots activism, cheap rent and unselfconscious of a city that was not yet considered cool.

I wanted to capture that, along with the sense of a coming wave of gentrification and change.

Q: The Publishers Weekly review of the book says, "Though no wicked stepmothers or Greek gods inhabit the world of this surreal, magical realist tale...Keil steeps the narrative in fairy tale and myth." What do you see as the mythological aspects of the novel?

A: The Euripides tragedy Iphigenia at Aulis was the first fascination that inspired the novel. Daughter of Greek king Agamemnon, Iphigenia was sacrificed to move the winds so the Greek fleet could sail to make war on Troy. In some versions of the story, she is saved at the last minute by Artemis, who puts a deer in her place.

The book starts with many of these elements—a father’s betrayal, a last-minute save by a bow-and-arrow-wielding protector with a dog at their heels.

Other elements of the Atreides family story made their way into the book--Orestes, Iphigenia’s younger brother, is pursued by avenging goddesses called The Furies—the name of the punk band that adopts Orr in Summer in the City of Roses. Feminist fury and deer imagery are integral to these myths and became a big part of the novel.

A deeper element, one that I realized as I finished the first draft of the book, is the theme of generational trauma and healing.

A: I always knew how the book would end, which was a new experience for me. What I didn’t know what how I’d get there. THAT was quite an experience.

Because I sold the book on proposal, I had a deadline—one I wasn’t sure I could meet. I was stalled out at the halfway point in the book, unsure how to proceed.

Luckily, I was accepted to a residency that provided the exact right kind of magic—a perfect hand-built cabin in a gorgeous forest setting. My draft was due the day the residency ended. Somehow—I’m pretty sure the folding of space-time was involved—I was able to finish the book and do an entire editing pass in those three weeks.

A: I’m working on a collection of queered fairytales—something like A Visit from the Goon Squad meets The Bloody Chamber and a short story about a future where every living thing is sentient and can communicate—and fall in love.

A: My first-ever flash piece, “The Kingdom of The Belly,” appears in the forthcoming anthology Dispatches from Anarres: Tales in Tribute to Ursula K. Le Guin, edited by Susan DeFreitas, out Nov. 9.