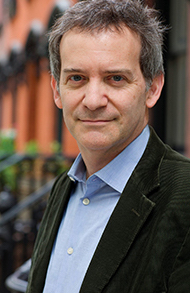 Nick Davis is the author of the new book Competing with Idiots: Herman and Joe Mankiewicz, A Dual Portrait. It focuses on the lives of his grandfather and great-uncle, both legendary Hollywood figures. Davis is a writer, director, and producer, and he lives in New York City.

Q: What inspired you to write Competing with Idiots?

A: I wrote this book for a myriad reasons that I know about, and probably a bunch more that are unknown to me.

In the first place, I wanted people to know about the personal and professional lives of these two enormously accomplished, fascinating men who happened to be my relatives: my grandfather Herman Mankiewicz (co-writer of Citizen Kane with Orson Welles) and his brother Joe Mankiewicz (writer-director of films such as All About Eve).

But second, more personally, I wanted to untangle some of my own assumptions about the two of them. Herman was my mother’s father, but I never met him; he died long before I was born, when my mom was still only 15.

Also, because my mom herself died when I was only 9, she wasn’t around to answer questions about her father and uncle, so I grew up with some pretty simplistic ideas about who these two men were: that Herman was the funniest man who ever lived, drank himself into an early grave, and wrote the greatest movie of all time, Citizen Kane; and that my great-uncle Joe, on the other hand, Herman’s younger brother, was cold and ambitious and made the biggest bomb Hollywood had ever churned out – 1963’s notorious Cleopatra, starring Elizabeth Taylor.

For decades, I had inhaled this kind of easy dichotomy about the two brothers: Herman: hilarious, self-destructive, doomed; Joe, cold, calculating, friendless. I wrote the book ultimately to try to arrive at the truth of who these two men really were.

Q: As you worked on the book, what did you see as the right balance between your roles as biographer and relative?

A: A terrific question – and one of the reasons the book took so long to write. (I signed the contract in May 2003!) 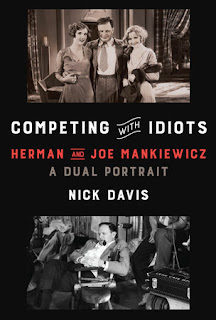 After years of inertia, I decided that what the book needed was me. So my next drafts told not just Herman’s and Joe’s life stories, but also mine – as I was fascinated by the many parallels between my life story and theirs, and the way I had unconsciously imitated so many of their behaviors in my own personal and professional life.

Thankfully, my editor, the brilliant and eternally patient Vicky Wilson at Knopf, saw those drafts for what they were: “You did this in order to write the book,” she said. “Now take your story out of it.”

Once I did – not without some kicking and screaming, of course – I saw that what remained was exactly the book I wanted to write all along – not so much a dual biography as a dual portrait, where the author’s hand does not have to be invisible.

I could admit who I was – not some kind of objective, all-knowing eye in the sky, but just an author with a point of view – without having to filter everything through the lens of being their relative or overwhelm the reader with my own, largely irrelevant life story. It felt real, and it felt right. That’s the book I ended up with.

A: The book’s title comes from a famous telegram Herman wrote to his friend Ben Hecht after arriving in Hollywood in 1926 and assessing the state of play:

Will you accept three hundred per week to work for Paramount Pictures? All expenses paid. The three hundred is peanuts. Millions are to be grabbed out here and your only competition is idiots. Don’t let this get around.

Often credited with starting the flood of East Coast writers out to Hollywood, the telegram is sly and funny and may be the piece of writing, aside from Citizen Kane, for which Herman is best known.

The spirit of that telegram -- that you are surrounded by inferiors, and that you are in competition with everyone - is I think the essential nature of both Mankiewicz brothers.

Herman and Joe’s father, Franz, came to America at the age of 17 in the late 19th century, and he drove his sons relentlessly. Nothing short of perfection was allowed.

All their lives, each brother would tell of coming home with a 97 on a test only to be asked, “What happened to the missing three points?” While in some families that kind of remark might have been said with a hint of irony, for Franz Mankiewicz, the pursuit of perfection was deadly business.

So I chose the title to signify the telegram, the spirit of competition that animated the brother’s lives, and in some sense their curse and legacy.

Q: How would you describe the relationship between your grandfather and great-uncle, and what do you see as their legacy today?

Herman was older, louder, funnier, more expansive, more self-destructive – and when Joe was young, he worshipped Herman and followed in his footsteps almost religiously.

Herman got everywhere first, blazing the trail for Joe to follow: Columbia for college, Berlin for a brief stint after graduating, Hollywood, marriage, the Oscar… But Herman didn’t really think all that much about Joe, other than to deride him casually as “my idiot brother” – as in “My idiot brother signed a deal with Fox.”

Foe Joe, it was a different story.

Some people’s inner lives are dominated by their relationships with their father – but for Joe, Herman was the one. It was so extreme that when Joe was first in Hollywood, he took to joking that his epitaph would read, “Here lies Herm- I mean Joe Mankiewicz.”

But Joe was not content with a life in his brother’s shadow – unlike Herman, he respected the rules of Hollywood, and he determined not to self-destruct in contempt of an entire industry, as Herman did, but to master the rules of the game, and succeed.

And succeed he did, magnificently. He made many terrific movies, won four Oscars, and was truly one of the top movie-makers of the 20th century.

And what was his greatest cinematic accomplishment? The story of a younger, colder, ambitious artist who studies an older, more expansive, self-destructive (but beloved) artist, and determines to take everything from the older artist…

Still, Joe went to his grave denying there was an autobiographical element to his masterpiece, All About Eve.

A: At the moment, another dream project is occupying most of my time. I am producing and directing a four-part documentary series on the 1986 New York Mets.

The film, Once Upon a Time in Queens, will air as part of ESPN’s 30 for 30 series, and in a crazy coincidence, the first two hours of the film will air on ESPN on Sept. 14, the publication date for Competing with Idiots. (The series will also have a companion book I’ve written, an oral history of the 1986 Mets, published this October.)

Once these two projects are out in the world, I will take a nap.

A: Things take time. I first started a very different book about my grandfather in 1990. I put it away for 12 years, then I had the idea for this book. Even so, it took me nearly two decades… I was not ready.

It can be very frustrating, during the process, to feel that you aren’t making the progress you would like – but in the end, things take as long as they need to take. And some amazingly wonderful things can happen along the way.