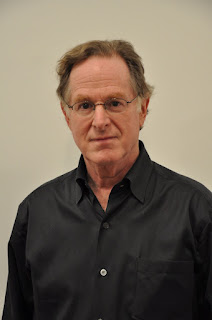 Marc J. Straus is the author of the new memoir One-Legged Mongoose: Secrets, Legacies, and Coming of Age in 1950s New York. His other books include the poetry collection Symmetry. He is also a physician and an art collector, and he runs the Marc Straus Gallery in New York City. He lives in Chappaqua, New York.

Q: What inspired you to write this memoir?

A: I’ve had this book in mind a long time. Stories about childhood abuse are all too numerous. In most cases the abused never discussed it. Even decades later they find it difficult to recount.

The vast majority of cases are unreported. Even when the abused acknowledge what happened we don’t know who they were at the time of the events, what they were like then and exactly what happened.

This book is possible because I’m fortunate enough to have unusually good recall. It’s narrated by my childhood self. I was badly beaten by my mother since before age 2. It shows how such events can shape someone’s childhood and their life going forward.

Q: The writer Ari L. Goldman says of the book, "There are pivotal years in life when everything changes and comes into focus. In this touching memoir, Marc Straus reaches back to two eventful years in his childhood and retells them in vivid detail." What was it about those years that became pivotal for you? 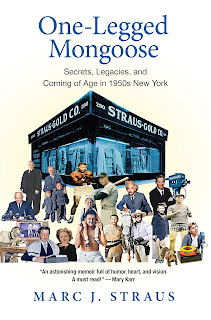 A: One-Legged Mongoose opens when I’m 10 and my dad tells me in the fall my younger brother Stephen and I will change schools. We’re switching to an ultra-religious Jewish school and commuting four hours a day. We weren’t religious.

By then I was a truant and consummate street fighter and risk taker. I expected more fights when we moved schools but I began to appreciate many of the kids—they were smart. I was nearing puberty and there was no hope until I could end the abuse that I was suffering at home. That happens at the close of the book.

Q: Did you need to do additional research to write the book, or did you remember most of the details you write about?

A: I recalled all the details vividly. I could only write the book when I was back there again, seeing and hearing everything fresh. I had just about everything correct, but I also had the good fortune to have an amazing fact-checker. She discovered things I never knew, such as the real birth name of my dad’s younger half-brother.

A: The one-legged mongoose was a fictional invention by my Boy Scout troop leaders.

I was sent on my first camping outing as required to become a tenderfoot. At this park in the winter the troop leader tells the newcomers that they weren’t allowed in the park for years because a one-legged mongoose—half man, half mongoose—roamed it and killed people. But it hasn’t been seen now so likely we’re safe but as scouts we should go look.

I volunteered to go down the long path at night to find the mongoose. I thought it was 99 percent likely the story was made up and I wasn’t afraid. I had faced real monsters.

A: Two novels nearing completion begun at the start of the Covid lockdown.

The Judge has two alternating stories. In one we’re in the present and an investigative reporter is two years into the story of a missing Supreme Court justice. The second is set in 31 C.E. Jerusalem and the narrator works for a chief judge of the Sanhedrin—the Jewish court.

A: I was a 10 year old who loved books and read voluminously. I was a savvy baseball card collector by then. I went on to collect contemporary art and the collection has been shown in 12 museums. I own an art gallery in New York City—MARC STRAUS.

Most important, I became a doctor, an oncologist. Caring for cancer patients was most of my life’s work and I was honored to be able to do that. I am married to Livia, whom I met first day of 9th grade. Two kids and five grandchildren.