Mandy Robotham is the author of the new novel The Girl Behind the Wall, which focuses on Berlin in the 1960s. Her other novels include The Berlin Girl. A former midwife, she is based in the UK.

Q: What inspired you to write The Girl Behind the Wall, and how did you create your characters Jutta and Karin, who are twins?

A: I’d been researching wartime Berlin for my third book, The Berlin Girl, and I just kept reading past the war years in the ‘60s.

As a child growing up, I remembered the Wall as something “being there” in the background, and then the momentous fall, but I knew very little about the years before that point. How did it come about? It was then I discovered it had gone up overnight and I was enticed from that moment.

The characters came quickly; I wondered how it would feel to be separated from a close family member, which led me to the twin scenario, of being forcibly divided from someone who is – in essence – the other half of you.

Q: As you mentioned, you've written about Berlin during World War II--what kind of research did you do to recreate Berlin in the 1960s, and did you learn anything that especially surprised you?

A: I’m generally fascinated by the ‘60s as a decade, and with this research I was like a pig in clover.

I accessed two very good textbooks focused on the Wall, but I also read memoirs and novels focused on East and West Berlin, watched a lot of Pathe news reels and films set around the time, noting the clothes they wore, food they bought and the café style.

I did manage a quick trip to Berlin between lockdowns and that was invaluable; I sat in Café Sybille, and under the red and white awning at Kranzlers’ (which, I’m sure, counts as bone fide research!).

More importantly, I went to the Stasi museum and the prison, where I stood in the cells of political prisoners – very sobering.  The GDR Museum is also a mine of information, as well as being fun and quirky. 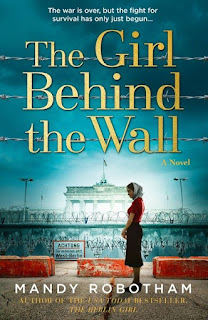 The surprise for me remains the speed at which the Wall went up amid such secrecy, but also how Berliners assimilated and simply got on with life; much like the war and the blockade of ’48, they had to. With our world in a virtual lockdown, that really resonated as I was writing the book.

Q: How would you describe the relationship between Jutta and Karin?

A: I think that up until the point where the novel starts, they do genuinely see themselves as entwined and quite dependent – they’ve been through a lot with the war, the loss of their father and the ’48 blockade. They cling to each other and the family for certainty.

I spoke to some twin sisters and they reported the same closeness while growing up.

While I’m reluctant to say the Wall was ever a good thing, it does force independence on Jutta and Karin, albeit in the cruelest way. They begin to find themselves as individuals, but as I say in the book, the bond – their thread – is tested to breaking point. Readers will have to see if it’s strong enough to survive!

Q: What do you think the novel says about building walls?

A: That they are, in the main, divisive.

There may have been a time in history where walls were protective, in the mediaeval period where bricks and mortar actually shielded city dwellers from dangerous invaders. In modern times, however, I think they’ve been used to repel and divide.

I’m also convinced that no wall is insurmountable. It may take time, but as the Berlin Wall illustrates, the people will always triumph. There are many ways to climb up and over, and to bring it down.

A: I’m going back to World War II for my fifth novel, this time to Scandinavia, where there’s a wealth of human stories to be told. It’s an area which saw much less open combat, but a good deal of subterfuge and resistance bravery. I’m writing on a subject that was briefly touched upon in my very first book, and so it’s nice to come full circle in a way.

A: I absolutely love being a full-time writer now, which gives me time to really submerge myself in the research. I count myself very lucky I can do that, especially over the last 18 months. People often ask if I ever run out of ideas, but it’s actually the opposite – I’ve got so many potential books buzzing around inside my head, I often have trouble sleeping!