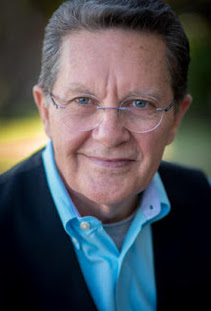 Larry Dane Brimner is the author of the new children's picture book Without Separation: Prejudice, Segregation, and the Case of Roberto Alvarez. It focuses on a 1931 court case. Brimner's many other books include Black & White. A former teacher, he lives in San Diego and in Tucson.

Q: What inspired you to write Without Separation?

A: The story of Roberto Alvarez had been on my radar since the mid-1980s.

Ever since the Public Broadcasting Service launched in the 1960s, I had been a fan, consuming its cooking and gardening staples. (This is something that continued into adulthood and—ah—ancient age. What can I say? I was an unusual child that grew into an eccentric grownup.)

At one point after I’d begun writing seriously, I happened upon a docudrama called The Lemon Grove Incident, and it struck me that a factual book about it would make an interesting title for young people.

I like studying about civil rights denied American citizens and other social justice (or injustice) issues. I also lived in downtown San Diego and was familiar with Lemon Grove, which was a stone’s throw away.

But try as I might over the years, I was unable to find the door into the story.

As straight nonfiction, it was dull because the court case that revolved around Roberto and his exclusion from Lemon Grove Grammar School wasn’t full of twists and turns. It was a straightforward, Judge-Judy case; that is, the case was brought to court one day and the judge issued a quick opinion.

Every year or so I’d pull out my research notes and take another stab at getting into the story, and it just did not work.

Finally in 2015 or 2016, I began tinkering with it again and thought that if I gave Roberto more of a role than he had in real life—historical fiction, if you will—it might work. The result is Without Separation.

Then it seemed to take years—at least far too long—to find an illustrator. But sometimes a story takes decades to come to fruition. 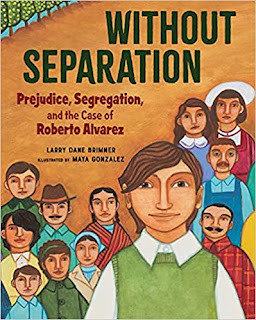 A: To research the story, I went back to old articles in the San Diego Sun and Evening Tribune newspapers.

I also read articles about the boycott of the Lemon Grove School District by the Mexican families and their children. Mexican and Mexican American children accounted for almost half of the school district’s entire enrollment, so this posed quite a financial impact to the system.

Roberto Alvarez Jr., Roberto’s son and a college professor, had written articles about the incident, as well as more general pieces about the role of Mexicans in the settlement of California and the Southwest.

The San Diego History Center and the Lemon Grove Historical Society also provided a wealth of information and knowledgeable people to interview.

Finally, court transcripts informed the speed of the trial. The book takes its title from these transcripts and the judge’s opinion.

Did I learn anything that surprised me? I’m not sure I was surprised by it, but systemic racism reared its head in the form of the school board’s belief, and the reality, that San Diego’s district attorney at the time supported its position that a separate school for children of Mexican parentage was necessary and right and just.

But, without going into detail, I also learned that racism, which we usually think of in terms of white supremacy, also exists in people of color and this is unfortunate.

Important stories need to be told regardless of who tells them, and if they are told in a fair and an objective and well-researched, honest manner that should be the basis of judgment.

Q: How would you compare Roberto Alvarez's experiences with those of kids today who face discrimination?

A: This is an interesting question. The times were different, yet many things remain the same.

In the 1930s—the Great Depression—minority groups were often blamed, especially by politicians and those who had fallen victim to the economic conditions of the day, for the difficulties.

During this period, people of Mexican decent were encouraged (and in some cases legally forced) to “return” to Mexico, even if the United States was the country they had been born in and/or the only country they knew. Sadly, current events tell the same story.

Q: The Kirkus Review of the book calls it "A critical contribution to discussions of equal access and of systemic racism." What do you hope kids take away from the book?

A: As I said in the book, “Sometimes a person has to stand up for what is right—to fight for justice, to confront discrimination.”

Almost all of my books for Calkins Creek have been about the struggle for justice and the righting of wrongs. I hope Without Separation and my other books do add to this discussion. I present the facts, and I simply ask that readers ask themselves what is right, how would they like to be treated.

A: I’m not working on anything. As I expressed to Roger Sutton in a recent interview, Without Separation may be my last book. And yet, it may not be.

Over the years I have sacrificed a lot to achieve what little success I have gained—family, friends were allowed to fall by the wayside in pursuit of print; deadlines were always convenient excuses for not mixing and mingling (not to mention a good hideout for a shy person)—and since the death of my spouse I’ve been doing a lot of soul searching and asking whether the hours, days, weeks, and months of isolation have been worth it.

Yes, I’ve produced one or two books I’m proud of, but have they made a difference in the world?

In discussing the notion of retirement with fellow writer David Harrison, he said something that resonated: “I fear I may only exist at the end of my pen.” In my case, it would be “at the end of a keystroke” rather than pen, but I worry that I so long have self-identified and been so by others as a WRITER, that I may not be able to not-write. The pursuit of publication, though, is another matter.

At this point I’m still mulling things over and trying to determine if it’s time to type --30-- at the end of my bio.