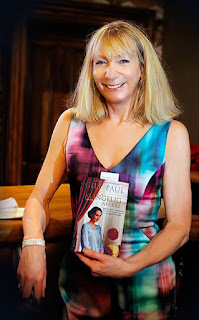 Gill Paul is the author of the new novel The Collector's Daughter: A Novel of the Discovery of Tutankhamun's Tomb. It focuses on the life of Lady Evelyn Herbert, who, with her father, Lord Carnarvon, and the archaeologist Howard Carter, was involved in the discovery of the famous tomb. Paul's other books include Jackie and Maria. She lives in London.

Q: How did you first learn about Lady Evelyn Herbert, and how did you research her life?

A: The discovery of Tutankhamun’s tomb is usually presented as a double act by Howard Carter and his sponsor, Lord Carnarvon, but when you look at photographs outside the tomb in 1922, there’s a short, dark-haired woman standing beside them, and that’s her.

A few years ago there was a television drama that portrayed Eve having an affair with Howard Carter, and the wife of the current Earl complained to the press that it was an absurd notion.

Howard was a friend of Eve’s father, he was 27 years older than her, and he was a brusque man who was never known to have a romantic or sexual relationship.

I was intrigued and started reading all I could about Eve, in books and online archives. I visited Highclere Castle, where she spent her childhood, and I have also been to the Valley of the Kings, so I can imagine what she saw there. I certainly agree she wouldn’t have had an affair with Howard!

Q: One theme running through the novel involves memory. Why did you decide to make that an important part of the story? 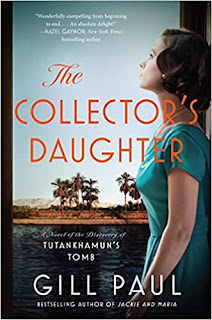 A: My vision for the book was the way a woman’s life was shaped by the historic event she was part of in 1922. I read that Eve had strokes in later life, and there’s a photo of her at the 1972 Tutankhamun exhibition in the British Museum where she looks a little vague.

That gave me the idea of writing about a woman looking back on the time when she was on the cusp of womanhood and her life was about to change irrevocably.

I have family experience of strokes and memory loss and I know how poignant it is when someone can’t remember an event that was a major part of their life. It was something I had always wanted to write about and it seemed to fit here.

Q: Another issue in the book involves the role of antiquities and where they belong. What did Eve (your fictional version and also the historical figure) believe about that?

A: The historical figure probably felt that her father deserved a share of the finds from the tomb, because that was accepted practice.

However, everything changed when Egypt became independent of its British protectorate status in 1922, nine months before the tomb was found, because Egyptian nationalists were determined to hang onto their heritage.

I have made my fictional Eve sympathetic to Egyptian nationalism, but I don’t know if that was the case. It seems indefensible in the 21st century to hang onto antiquities purloined from the countries where they were found, but that is a modern notion.

Q: Was your character Ana Mansour an actual historical figure, and what do you see as her role in the novel?

A: Ana Mansour is fictional, and I introduced her to bring an element of jeopardy. Her role is to remind Eve that there is something she must remember before it’s too late.

A: I have just delivered a novel entitled The Bootlegger’s Benevolent Bridge Club that will be published by Morrow in 1922. It’s about four women in 1920s New York, trying to have fulfilling careers as well as finding love against the backdrop of Prohibition. They are based on four real women, and I’ll be announcing more about them nearer the pub date.

A: I’m writing a book a year at the moment, which is pretty full-on, but I try to arrange my time so that I spend the summer researching, start writing in October, and deliver at the end of June the following year. It means I can spend the warmest, sunniest days sitting under a tree with a book and call it work!