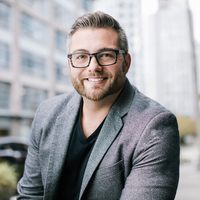 Tony Keddie is the author of the new book Republican Jesus: How the Right Has Rewritten the Gospels. He also has written Class and Power in Roman Palestine and Revelations of Ideology. He is assistant professor of early Christina history and literature at the University of British Columbia.

A: Starting to teach New Testament classes at a public university in Vancouver, Canada, after teaching the same classes at a similar institution in Texas was illuminating. My classes usually focus on the social and political contexts of the Bible and its interpreters.

In discussions, I started to realize that even my students who identified as “evangelical” or “conservative” Christians were often perplexed by, or frustrated at, the ways that right-wing American Christians interpret Jesus as a prophet of nationalism and economic conservatism.

Though right-wing Christian influencers often conceal their agency as interpreters of the biblical text, preferring instead to claim their interpretations as the “clear” and singular meaning of God’s word, I discovered that their interpretations on every hot-button political issue originated at distinct moments in American history.

Corporate-funded Christian conservatives articulated the persistent depiction of Jesus as a proponent of Small Government and individual liberties (against the “virus of collectivism”) in reaction to FDR’s New Deal programs aimed at creating a social safety net for the socially disadvantaged, or what the religious right dubbed “pagan stateism.”

This Small Government gospel increasingly took on white-supremacist and patriarchal overtones as right-wing politicians and preachers cast the movements for Civil Rights, women’s rights, and LGBTQ+ rights as Big Government infringements on their religious liberties.

They turned Jesus into a gun-rights proponent after efforts at gun control became popular following the assassinations of the ‘60s. And they started to use the Bible as a foundation for climate change denial in reaction to evangelical environmentalism in the ‘90s.

In each case, the Christian Right promoted interpretations that had not previously been common. And in each case, they did so with support from self-interested corporations and their political lackeys.

There are excellent books on the modern history of the Christian Right (and even more now than when I finished my book), but I decided to turn this research into a book because there are not enough resources available by Bible scholars that address a broad range of hot-button issues.

As a Bible scholar, I wanted to contribute a critical examination of the interpretive choices that Republican influencers make when appealing to the Bible to support their politics. But I also wanted to share ways that these texts they are citing can be understood more responsibly when they are read as an integral part of the books from which they are often plucked, and read in light of the historical contexts in which they were written.

In Republican Jesus, I recast the gospels as different windows into the social tensions of marginal Jewish Christ-following groups seeking survival and community in a brutal empire—as glimpses of diverse followers of Christ living in a world much different from our own. 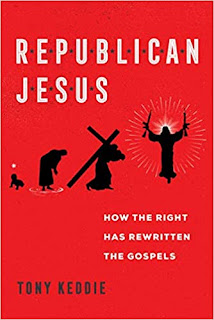 Q: You begin the book by stating, “Republican Jesus is the most powerful man in America.” Can you say more about that, and about how this concept became so powerful today?

A: Republican Jesus is powerful because the Christian Right is powerful. They are well-funded and have substantial lobbying networks framing legislation and supporting Republican candidates.

The politicians, pundits, and preachers who serve as their influencers—their information-controllers—constantly appeal to Jesus to put a neighbor-loving mask on their exclusionary and discriminatory politics. For them, Jesus is a tool, a trap, that can be used to attract support for their right-wing politics from more moderate or centrist Christians.

Trump secured the votes of 81 percent of white evangelicals in 2016 and he will likely do so again. Many of these members of Trump’s Christian base are happy to vote for Trump because he promises them power. “Christianity will have power. If I’m there, you’re going to have plenty of power, you don’t need anybody else,” he said at a Christian college in 2016.

He has followed through on this promise with his Supreme Court nominations, executive orders on religious liberty, and support for the state of Israel (a major issue for Christian Zionists).

However, many Christians also want to be able to understand Trump’s politics as consistent with the Bible. This makes the set of right-wing interpretive practices I describe using the metaphor “Republican Jesus” crucial for justifying Trump’s decisions.

Therefore, the Republican Jesus that has been developed over the past century is a key figure in current politics, and the influencers pulling his strings have even articulated some new political positions for him, like opposition to immigration and rejection of the idea of systemic racism.

I would argue that Republican Jesus is more important than ever for the Trump presidency because he compensates for the many ways in which Trump doesn’t fit the model of a neighbor-loving Christian leader.

Q: What impact do you think the ideas surrounding the concept of "Republican Jesus" are having on this presidential election?

A: In a last-ditch ploy to capture the votes of undecided Christians, Republican influencers are trying to corner Christianity. Franklin Graham, the son of the late evangelist Billy Graham and arguably the most influential of Trump’s Christian advisors, hosted a massive “Prayer March 2020” in Washington, D.C., in late September.

The event featured the most prominent figures of the Christian Right and involved a “surprise” visit by Vice President Pence. All involved pretended to be apolitical, concerned with prayer and faith alone, yet their prayers called on God to anoint the Trump administration, end the “holocaust” of abortion, and protect law enforcement.

Attendees wore red “Make America Godly Again” hats, waved “Jesus 2020” signs, and chanted “Four more years!” This event was anything but apolitical; it was the Right’s attempt at claiming ownership of Christianity.

During the official broadcast of the Prayer March, Tea Party leader Michele Bachmann joined the anchors to explain that this election is a choice between Government and God. With reference to masks being mandated, she lamented that “so much of our life is controlled by government. …people just think that government’s our source for everything. As believers, we know that God is our source. He’s our financial support….”

This is precisely the type of gospel of limited government that Republicans have read into the gospels. It finds expression, among other places, in Bill O’Reilly and Martin Dugard’s bestselling book Killing Jesus (and the National Geographic film version), which presents Jesus as a Christian opponent of a liberal Jewish-Roman government whose excessive taxes are impeding the God-given ability of each individual to pull himself up by his bootstraps.

Republican influencers posit several problematic interpretations of the gospels in support of their claim that the Bible as a whole, and Jesus in particular, unequivocally teach limited government and free market capitalism, though these modern phenomena were foreign to the worlds of the biblical authors.

In the process, they obscure the ways that government regulations are designed to mitigate the exploitation of the poor and discrimination against People of Color, the LGBTQ+ community, immigrants, and people with disabilities.

They spin problematic interpretations of certain biblical verses while ignoring or downplaying the many places in the gospels where Jesus calls on people to love their neighbors, love their enemies, and give their possessions to the poor in order to gain access to heaven.

Q: What do you see looking ahead when it comes to the power of the Christian Right in the United States?

A: Regardless of what happens in this election, the Christian Right isn’t going anywhere.

Now that they have succeeded in taking control of the Supreme Court for the foreseeable future, we are going to see them focus more than ever on overturning Roe v. Wade and pursuing religious exemptions for a wide-range of anti-discrimination laws (e.g., the extension of Title VII of the Civil Rights Act to prohibit discrimination based on sexual orientation and gender identity).

If they don’t fare well in the elections, I suspect that we will see major fundraising and lobbying at the level of state legislature. The Right’s strategy for eroding federal laws and regulations will materialize primarily in efforts to transform state laws and appeal to the Supreme Court to create special privileges for conservative Christians in the name of “religious liberty.”

I think that we will also see much more overt attempts to demonize progressives, including Christian progressives, using the religious language of spiritual warfare.

Additionally, the increasing mixing of QAnon and other white supremacist hate groups with elements of the Christian Right could lead to further normalization of racism, antisemitism, and xenophobia within the Christian Right. This could have dangerous implications, I’m afraid.

A: My new project turns from Jesus to the apostle Paul, and specifically to chapter 13 of his letter to the Romans. This is the infamous chapter where Paul says, “Let every person be subject to the governing authorities; …whoever resists authority resists what God has appointed; … for the authority does not bear the sword in vain.”

We have seen this chapter used repeatedly by Republican influencers to support Trump’s authoritarianism—for instance, when Jeff Sessions used it to justify the border separation policy and, more recently, when Robert Jeffress used it to defend police officers as “ministers of God.”

I am exploring how this chapter has been used to justify authoritarian power and state violence in different periods—not just the age of Trump, but also during American slavery and in Nazi Germany. As always, I am also interested in showing what these hate-fueled interpretations miss or obscure about the ancient text and its historical context.

In this case, the fact that Paul proceeds in this chapter to give an exposition of the law to love one’s neighbor is often overlooked. As is the fact that Paul elsewhere says that God will destroy every ruler, authority, and power when Christ returns (1 Corinthians 15:24). Romans 13 is much more complex and potentially subversive than authoritarian interpreters let on.

A: I hope that my book may serve as a resource for those trying to understand the ways that the Christian Right uses problematic interpretations of the Bible to authorize their ethno-nationalist politics of social, religious, and economic conservatism.

I encourage readers to hold the Christian Right accountable for their biblical disinformation however they can, whether in conversations with family and friends, through social media, or in op-eds in their local papers.

At the same time, I think it’s important to amplify the voices of the religious right. Mainstream media tends to focus on the sensational publicity stunts of the Christian Right, but the Christian Left and their interfaith allies get very little coverage in mainstream media. And if they get any attention at all on Fox News and in conservative media, it is negative.

Centrist Christians (especially mainline Protestants and Catholics), in particular, receive very little exposure to people who interpret the Bible differently than right-wing influencers—people like Rev. Dr. William Barber and Rev. Dr. Liz Theoharis of the Poor People’s Campaign, who interpret the Bible as a call for social justice and an invitation to critical reflection on inequalities in our world.

Their efforts need to be promoted and supported in order to quell the Christian Right’s attempt to claim ownership over Jesus and Christianity.