Ian K. Smith is the author of the new novel The Unspoken. His other books include The Blackbird Papers and The Ancient Nine. Also a physician, he lives in Chicago.

Q: How did you come up with the idea for The Unspoken, and for your character Ashe Cayne?

A: I remember watching the news about the shooting of the unarmed man in Chicago named Laquan McDonald. I thought about what would’ve happened had one of the officers who was present at the time come clean earlier and refuse to participate in the coverup. What if he stood his ground on his personal integrity, even if it meant going against his brothers in blue.

So I wanted to create that character, a hero in our times who was determined to pursue justice at all costs. Ashe Cayne is the kind of guy I would want as a friend, a guy I would watch a game with or sit for hours and talk to over a plate of bbq brisket and fries. He has this insatiable desire to make wrongs right, even when it’s an uphill struggle or everyone else is content with simply leaving things where they are.

He is an imperfect hero. He’s tough and smart and sarcastic, but he struggles in romance and a complicated relationship with his father. Most of all, he doesn’t take himself too seriously. He can quote the rapper Biggie Smalls as easily as he can Chaucer. That’s my kind of guy.

Q: As a physician and writer, how do the two coexist for you? 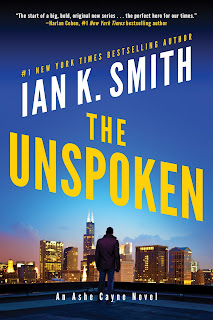 A: I have always been a reader and lover of mysteries/thrillers. I have also believed that just because one has an interest in something, it doesn’t mean they can’t have an interest in another passion that exists on the opposite side of the spectrum. My life is all about pursuing passion and maintaining balance. I like to be busy, so time efficiency is key for me.

The suspense/mystery genre resonated with me as a young reader and stuck with me. While most of my literary career has revolved around health and wellness books, particularly diets, I have always had an equal passion and desire to write mysteries.

I always wanted to deliver to readers the excitement and emotions I got from reading authors like Grisham, Dunne, Connelly, and Coben. I always wanted to make readers late to appointments, lock themselves in their rooms or cars or stay up deep into the night because they just have to read one more page.

When readers tell me this after finishing one of my books, it makes me feel extremely satisfied that the mission was accomplished. The Unspoken is my third mystery following The Blackbird Papers and The Ancient Nine.

A: I write my story in my head first, then when I have it all worked out, I sit down to the computer and go to work. I don’t do a traditional outline, but I know the major tent poles of the story and the basic character arcs.

When I sit down, I have a good idea of the destination points I need to reach, but I allow for some spontaneity on the roads I decide to take to get there. This allows me to be organized and creative at the same time.

Q: This is the first in a series--what's next?

A: It was clear to me from the very beginning that Ashe Cayne was going to be a series, because the character I wanted to develop and the cases he would take on would deserve a life longer than one book. He will have plenty of adventures in the future that will take readers through the streets and stadiums and mansions and tenements in the various Chicago neighborhoods.

Ashe is a hero for our time, complicated in some aspects, simple in others. Ashe is a man who is determined to seek justice at all costs and is fearless in his pursuit without taking himself too seriously. I have already written the next installment, currently titled Wolf Point. Ashe rises to the occasion once again.

A: The Unspoken has been optioned to become a TV series, so I’m really excited that it’s possible Ashe Cayne and his journey will make it to the screen!