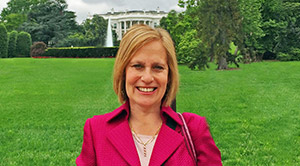 Robin Stevens Payes is the author of Saving Time, a new middle grade novel for kids. It's the third in her Edge of Yesterday series, which also includes Edge of Yesterday and Da Vinci's Way. Also the founder of the Edge of Yesterday website, which teaches young people about storytelling and narrative journalism, she lives in Rockville, Maryland.

Q: This is the third book in your Edge of Yesterday series. Has your character Charley changed in ways you didn’t expect when you started the first book?

A: She has been humbled. She started out as a pretty cocky 13-year-old who thinks she can do everything. Then the time machine works--there’s some romance with the cool dude, Lex, who’s not her type--and she gets triggered back 500 years. What’s she going to do?

She decides she’s going to make the best of it and interview her hero, Leonardo da Vinci, about how he did it all, so she can be a Renaissance girl in the 21st century. Then her tablet gives away the secrets of the future, and there’s the issue of witchcraft. She has to reverse-engineer the time machine, with Leonardo’s help. She has to teach him relativity.

What really humbles her the most is that there’s something wrong with her mother. It becomes very personal; she’s coming down to earth. She needs desperately to get home to her mother, but she’s stuck 500 years earlier. 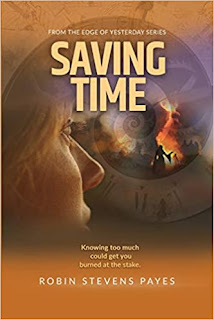 What was surprising to me is in book 3, when she’s not busy trying to do everything she would do and is awaiting trial by fire. And she thinks, What if I’m not in the future? It gets more philosophical. Teens have those moments: Am I being seen and heard, am I doing the right thing? It’s just more dramatic than it is for most 13-year-olds!

Q: How did you come up with the plot for this third book?

A: Edge of Yesterday, when it started, was a screenplay. The three books were one book. I got feedback that for middle grade fiction you can’t have a 350-page book. I have since learned that’s not true. But I had to decide how to whittle 90,000 words down. I was trying to do that, and I consulted with an editor, who said, Why not turn it into multiple books?

I’ve got Charley stuck in different time periods. How do you make each book stand alone, and yet be part of a series? It was fun to weave it together and give enough of a backstory.

Q: What did you learn while researching the book?

A: What didn’t I learn! I wanted to make scientific concepts like gravity and relativity [understandable] for a middle grade audience. And I didn’t want to talk down to the audience. On the Edge of Yesterday website, EdgeofYesterday.com, we have words of the week. I wanted to have challenging vocabulary but have it accessible on the website.

Q: How did you choose the illustrations to include in the book?

A: It was really hard. I had to worry about rights and clearances. If I couldn’t take a picture myself, we used royalty-free sites. A couple of times it was challenging. I wanted to give kids the sense of being in that world. The average kid is not going to go to the Pitti Palace in Florence.

There’s a scene where Charley is in the WC, the powder room, whatever they called it then, and I found a great image—in Lorenzo de’ Medici’s palace, they excavated a sauna/bathroom, and there were photos online. I reached out to the photographer and to the magazine that printed it, but never heard back. It was discouraging.

Q: What are you working on now? What’s next for Charley?

A: Now that she knows how time travel works, and she’s being the ultimate Renaissance girl, she wants to meet all her heroes. She has her sights set on an 18th century mathematician/philosopher/physicist who translated Newton into French and dueled at court, who beat masters at cards and was the consort of Voltaire.

Charley would have to resurrect Emilie du Chatelet for modern-day teens. She wants to find a girl like her.

A: I always like to include that I have a website, EdgeofYesterday.com, with interactive content for learning through story. It’s meant to be fun. I work with young people—interns, people who attend my workshops. I train them in narrative journalism: storytelling with evidence. The idea is to make it relevant to young people today. There’s a time travelers’ portal with great content. It’s stealth learning.

I’m looking for young people who want to keep contributing to it!