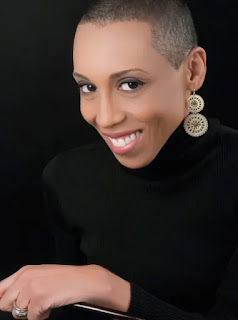 Andrea Davis Pinkney is the author of Loretta Little Looks Back: Three Voices Go Tell It, a new middle grade novel for kids. It is illustrated by her husband, Brian Pinkney. Her many other books include The Red Pencil and A Poem for Peter. She lives in New York City.

Q: You describe Loretta Little Looks Back as “a novel with the intention of inviting readers to step into the shoes of characters…” How did you decide on the book’s structure?

A: I’ve called the book “a monologue novel” to bring breadth and power to its form. In a theatrical setting characters come alive, right before our eyes. We experience their energy. This kind of emotional intensity is what I was going for in creating Loretta, Roly, and Aggie B.

Their first-person narratives are a mix of spoken-word poems, folk myths, gospel rhythms and blues influences, all rolled up to tell one story. My hope is that the “go-tell-its” will invite readers to experience the grit, struggle, heartache and emotion of the Littles – to get “behind the eyes” of these children who are living under the lash of racism, and coming up strong at each and every turn. 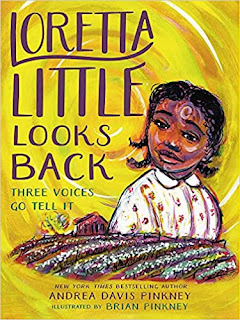 Q: How did you and your husband collaborate on this particular book?

A: Brian and I have, collectively, published 60 books together. Loretta Little Looks Back holds a very special place in our hearts, because the story includes multiple voices and perspectives, and because it’s an illustrated novel.

Unlike a picture book, the novel format allows the art to be representational, metaphorical. Brian and I spent many months discussing ways in which the art would illuminate the emotional nuances of the narratives.

When Brian showed me the evocative cover painting depicting Loretta, I was immediately struck by its beauty. What my husband has achieved is extraordinary. Loretta’s probing gaze draws strength from the resilience of those who came before her, while at the same time looks ahead into the eyes of hope. She’s a child with perspective — and vision.

A: My next book will be published in January 2021. I’m honored to collaborate with Chelsea Clinton on the launch of her She Persisted chapter book series. The publishing program will begin with 13 titles, written by several authors over the course of a year. My book, a Harriet Tubman reader, will kick off the series.

I’m thrilled to be among fellow authors Meg Medina, Lesa Cline-Ransome, Renée Watson, Rita Williams-Garcia, and others whose books will also be part of the series. We’ve been dubbed the “Persisterhood.”