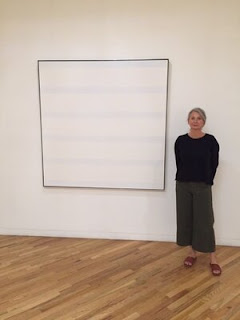 Deborah Reed is the author of the new novel Pale Morning Light with Violet Swan. Her other books include The Days When Birds Come Back and Olivay. She lives in Oregon.

Q: You said in our previous interview that an aspect of Pale Morning Light with Violet Swan actually happened to your own family. Can you say more about that, and about how you created these characters you write about?

A: A few years ago, I discovered that my great-grandfather ran a whisky still out of his basement during prohibition with his eldest son. The still exploded one day and killed his granddaughter, and the two men went to prison. My grandmother was a young child in that house at the time and was sent away to be raised by an older sister.

I couldn’t help wondering if she would have been the same kind-hearted person that she turned out to be if she had been injured or had remained in that house.

In the course of thinking all this through, I’d already created a main character who was an artist of the same generation as my grandmother, and I gave her this backstory, with the difference being that her right side was burned in the fire, and that she blamed herself for the tragic outcome of the fire in which family members were killed.

This is the burden, the literal scars she carries for the rest of her life. These scars bind her to her past and make visible an ugly secret about her family. The story of the still had been a secret in my own family. My father had no idea why his mother was raised by her sister. He learned the truth when he was 80 years old.

I don’t think this is that unusual, by the way. It seems many of us have very little knowledge about the lives of our parents and grandparents before we came along. I think this is why ancestry.com has become so popular. Part of the appeal is that family secrets are revealed. 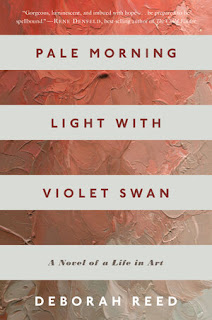 From the start I felt compelled to create a female artist who struggles to parent to her son, while staying true to her calling as an artist. As a writer and the mother of two sons myself, I know how difficult it is to balance these things. Male artists have traditionally not dealt with this conflict, remaining free to procreate, while not expected to care for their children in any hands-on way.

The novel, to me, is as much about motherhood as it is about art.

It is also about turning a difficult and tragic past into works of art that evoke a deep sense of harmony and joy—not as a way of erasing sorrow, but in a way that an ugly duckling becomes a swan, if you will. Swan is also a family name.

Q: You note in your acknowledgments that Violet’s art was inspired by that of the artist Agnes Martin. What inspired you about her work?

A: Agnes Martin’s work is famous for many reasons, one of which is the emotion it evokes in the viewer through the use of deceptively simple techniques of color, lines, and space. One does not look at her work to understand what it means. One looks at it to experience how it makes them feel.

Martin also had a very difficult past and kept her private life a secret, just like my character, Violet Swan. For both women, their truest attention in life was given to their work, and in turn that work lives on to inspire anyone lucky enough to be in its presence.

A: The title is the name of the final painting that Violet Swan is trying to finish before she dies. It is also the title of the documentary her grandson makes about her life. Pale morning light evokes a new day, offered up like a gift that is meant to be acknowledged and received.

Q: Violet’s life stretches over almost a century. What do you think her story says about the life of an artist and a woman during that time period?

A: It was very tough going. Women artists were not taken seriously, and even if they were, they were not paid well, if they were paid at all. They weren’t given “rooms of their own” in which to create, and so were forced to either give up the work, or try to manage it alongside endless domestic duties.

Agnes Martin wasn’t fully recognized as the great talent she was until the latter years of her life, and, like so many others, she has truly been celebrated since her death.

A: A story about two cantankerous but tender old women who become friends over the course of a summer in an attempt to get an 8-year-old girl to speak after she suddenly becomes mute.

Revealing their pasts as the friendship grows, the women look back on what it meant to be young wives during the women’s liberation movement, to lose their own voices, along with their husbands, and to raise daughters into adults who ultimately view them as a disappointment.

The more they try to understand why the girl has stopped engaging with the world, the more they understand their own place in the order of things. Mistakes, regrets, and a bitterness that has robbed them of joy create the lens through which they see the solution for how to steer the mute girl back into the world.

A: In the course of writing Pale Morning Light With Violet Swan, I become the owner of my local bookstore, Cloud & Leaf Bookstore. It even made its way into the book. I love being in the store and talking books with customers. I love offering up a space that nurtures my community. I love having any book I want at my fingertips. I’m quite busy these days, but everything is a labor of love. I wouldn’t have it any other way.