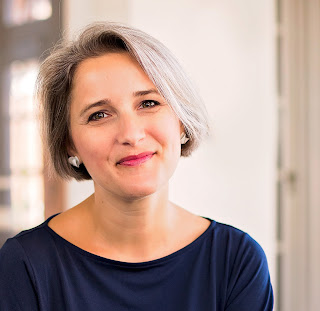 Rachel Beanland is the author of the new novel Florence Adler Swims Forever. She lives in Richmond, Virginia.

Q: Florence Adler Swims Forever is based on a true story--what did you see as the right blend between history and fiction as you wrote the book?

A: I always tried to remember that, while I was basing the novel on an event that had really happened in my family, what I was writing was first and foremost a work of fiction. At the start of the project, I did as much research as I could on the real Florence, her drowning, and what happened to the family in the weeks and months after she died.

The facts I had were precious to me, but I wasn’t afraid to deviate from them for the sake of the story. At the end of the day, my goal was to write the best novel I possibly could, and that meant prioritizing characterization and plot. 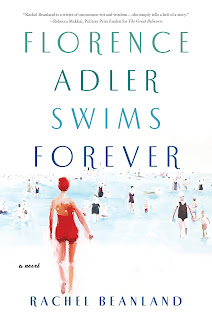 Q: The novel is set in Atlantic City in the 1930s--how did you research the book, and did you learn anything that especially surprised you?

A: Researching Atlantic City in the 1930s was a lot of fun. Because Atlantic City was a popular tourist destination, there are thousands of old postcards and guidebooks, maps and souvenirs just waiting to be combed through. Rarely was there a hotel or restaurant that I couldn’t find a really great image of.

To aid me in my research, I enlarged an old map of Atlantic City and had it mounted on foam core. Then I’d use pins to mark the locations of important landmarks and, later, scenes in my novel.

As far as surprises go, my grandmother had always called Atlantic City “a Jewish town,” and when I began to do the research, I realized she was right. Atlantic City really did have a higher concentration of Jewish residents than other American cities of its size. This was useful information to have as I began to build out the Adler family’s world.

A: The title came to me in the midst of writing the book. I wanted a proper noun in the title—something that would make it easy to remember, and when Stuart, Anna, and Gussie established their secret society, I knew I had what I needed. I think the title works because, as you read the book, you realize there are several interpretations of what it means for Florence to swim forever.

A: For me, this is a story about what happens when we think we know what’s best for other people, when we keep secrets for the benefit of others. But it’s also, more broadly, a book about grief, and the way no two people grieve in exactly the same way. When we lose people we love, we don’t ever really “get over” them, we just learn to fold the loss into our lives.

A: Another novel. I’m too nervous to say much more than that, but what I can say is that, while I was writing Florence Adler Swims Forever, I wondered how I’d ever be able to write characters I loved as much as the Adler family. Now that I’m on the other side of my first novel and writing something new, I’m pleased to report that my fears were completely baseless!

A: If you’re interested in Channel swimming and want to be thoroughly inspired, I’d urge you to read some biographies of Florence Adler’s hero, Gertrude Ederle, who became the first woman to swim the English Channel. I really enjoyed Glenn Stout’s Young Woman & the Sea.

--Interview with Deborah Kalb. Rachel Beanland will be speaking (virtually) at the Bender JCC of Greater Washington Oct. 6.