Deborah Wiles is the author of the new young adult book Kent State. It focuses on the events of May 4, 1970, at Kent State University. Her other books include Countdown and Revolution. She lives in Atlanta.

Q: Why did you decide to focus on Kent State in your new book?

A: I wrote three novels about the 1960s -- documentary novels with scrapbooks of primary sources sprinkled throughout -- and I kept bumping up against the Kent State tragedy. I kept saying, "No way can I write about that."

I remember it vividly -- I was a junior in high school at the time, a teenager myself, like some of those killed -- and it had been so shattering at the time, I couldn't imagine wanting to revisit those feelings and that violence, but then I decided I couldn't NOT do it, as there was absolutely nothing out there in the literature for young people, not only about Kent State, but about First Amendment rights and the long arc of government over-reach in this country, back to the Boston Tea Party, to Wounded Knee, to Kent State and beyond, and so I told my editor, David Levithan at Scholastic, "this needs to be my next book."

It's an organic outgrowth of the Sixties Trilogy books, and, like those books, it's a time that comes out of my life.

Q: The story is told in free verse, from a number of perspectives. How did you choose the book's format? 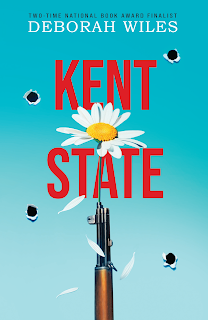 A: There was a mountain of material to choose from. All you need do is google "Kent State May 4" and there it is.

I didn't want to repeat what I had done with Countdown, Revolution, and Anthem, the Sixties books -- I didn't want to deal with photographs and other primary sources in the text. I felt it would clutter this particular moment in time, especially as so much context would be available at a swipe on your phone or computer as you read the book.

I wanted this book to be as elegant and eloquent as possible. David and I discussed ways to approach such a tough story. We had both just read, independent of each other, Lincoln in the Bardo by George Saunders, and had both loved it.

I loved the idea of disembodied voices in Bardo with different viewpoints and generations telling that story. David brought up the idea of collective memory. I combined those two thoughts and my desire for eloquence, and a conversation was born, with nameless characters who are defined by their viewpoints, arguing on opposite sides of the page in different size fonts and different typefaces.

So you've got the students, black and white, telling you about what happened on May 4, 1970, but you've also got the viewpoint of the National Guard, the administration, and the townspeople speaking as well.

Telling the story this way centralizes one of the key themes in my writing, which is that every human being is worthy of dignity and respect, that it's hard to hate someone when you know their story, and that all voices matter.

In this polarized time we live in today -- just as it was in the late Sixties when we were protesting the Vietnam War and Nixon's incursion into Cambodia with American troops -- it's hard to be heard. It's hard to listen. And any event in time consists of many voices with differing viewpoints.

A: In addition to the online and in-print research I did, I conducted interviews with survivors and listened to dozens of oral histories of May 4 by survivors and others, and I went to Kent State University and the town of Kent twice.

The first time, I attended the annual observance of May 4, which I detail in the author's note in the book. It's a moving experience. I spent time at the Visitors Center, which is a treasure trove of contextual information.

The second time, I was there in January and spent three days in the Special Collections May 4 archive in the KSU library, immersing myself in primary source documents, including letters from townspeople saying, "You should have killed more of them." I include that viewpoint in Kent State, as well as radically different points of view.

What I didn't know was that this tragedy unfolded over a four-day time frame, from Friday, May 1 through Monday, May 4 (which also provided me a structure), and that the National Guard was only called out because Governor Jim Rhodes was running for election to the Senate, and there was a run-off election coming up on that Tuesday.

The mayor of Kent called the governor in fear on Friday night when students, who were protesting Nixon's invasion of Cambodia and widening the war, spilled into the Kent streets (after the mayor closed the bars) and a trash can fire was started in the street and windows were broken.

Rumor had it that the Weathermen, a "left wing terrorist organization," were in town, which they were not, and Mayor Satrum called for backup from the state.

Rhodes, running on a "law and order" platform, called out the Ohio National Guard, and they came straight from working a teamsters strike, with little sleep and less desire to be on campus at Kent State. Some of them were Kent State students who had joined the Guard to avoid being drafted.

As a teenager, I knew of Kent State as the day the National Guard fired into a crowd of unarmed, war-protesting college students on their campus, and killed four of them (two who were just walking to class), wounded nine more, and effectively ended the Sixties. I didn't know there had been so much more to it.

And until I started researching, I didn't see the parallels to what is happening in our world today, which in this publication year for Kent State, and a pandemic year for all of us, has been thrown into stark bas-relief with the killing of George Floyd and Breonna Taylor, Armand Arbery and so many others, the Black Lives Matter movement, and the associated violence and overreach of the federal government, which echoes the overreach at Kent State.

I also didn't understand the role of BUS -- Black United Students -- at Kent State, which lent another voice to the full story, and which I include in the book. Basically, black students were told -- under BUS advisement -- to stay away from the Commons on May 4, and most of them complied.

As I heard in more than one interview I conducted with black students: "You see a white man standing there in a uniform and holding a rifle and you don't think it's loaded? Get real." Black students knew those guns were loaded. White students didn't believe they were loaded, or believed they held blanks, and certainly didn't believe they'd be shot, which, of course, emboldened them.

But that's exactly what happened -- all four students shot and the nine wounded were white. Which tells you a lot right there about the long arc of privileged thinking in our society, but which does not at all dismiss or make excuses for the actions of the Guard that day.

Protestors -- many of them teenagers -- had rocks and sticks and epithets to throw. By Monday their mantra had become more "Guard off campus!" and they were outmatched by a  machine, a government, that could -- and did -- kill them.

I could go on about what I didn't know! That's why research is so rich and so necessary and why primary sources are so important. And even then, you can't always get at the truth. Was there an order given to fire? If so, who gave it? Why? Were there outside agitators? Who burned down the ROTC building on Saturday night?

Despite multiple investigations, there are no definitive answers to the why or how of what happened at Kent State, although it indisputable that those four students did not have to die.

Q: The Publishers Weekly review of the book says that  "this hard-hitting historical novel provides valuable perspective on unrest and violence, both timely and timeless, and an invitation that speaks to the present: "We hope you're/ on fire/ for change.'" What do you think of that assessment?

A: I'm glad for that assessment. I want to reach young people and I hope they will indeed be on fire for change.

A big theme of the book is the importance of First Amendment rights. I want young people to understand citizenship. I want them to shape history. I want them to be the change they wish to see in the world. I want young people today to see that facts matter, that every person's story is important, that listening is vital, that memory is malleable, opinion is emotional, and thinking critically is crucial.

This is one reason why literature is so important. Why books are so precious. Why stories of all kinds and colors and identities are so necessary. We are all interconnected in this endeavor. We are all serving the magic of stories – including our own! – to inform, uplift, soothe, challenge, nurture, make us think, make us laugh, help us see ourselves depicted on the page, and connected to one another’s stories.

Books bring light into darkness, and that is what I hope for Kent State, that it has a chance to get out there, even in this pandemic year, and to do its work in the world.

A: Riffing off the Sixties Trilogy and Kent State, I'm now working on a book about The Lost Cause of the Confederacy and the Rise of White Supremacy. The working title is Charlottesville.

I grew up in the Lost Cause mythology and I want to dismantle it for young adult readers, for all readers. Part of the story is my ongoing work in dismantling it for myself over the years, perennial work for me both personally and professionally.

A: I appreciate this opportunity to share Kent State with you and with readers everywhere. Thank you so much for inviting me!