Emily Gray Tedrowe is the author of the new novel The Talented Miss Farwell. She also has written the novels Blue Stars and Commuters. She lives in Chicago.

Q: You write that your new book was inspired by a news story about a woman in Illinois who embezzled millions of dollars--and by Patricia Highsmith's novel The Talented Mr. Ripley. How did those inspirations help you create Becky Farwell?

A: Yes, The Talented Miss Farwell is loosely inspired by an actual crime committed by a woman in a small Illinois town who embezzled over $50 million in 20 years she served as treasurer in the town government. I heard this story reported on NPR as it broke, several years ago while I was driving my two kids on Lake Shore Drive in Chicago where we live.

I was instantly captivated by the craziness of this epic crime but the thing that grabbed me as a writer was when the newscaster pointed out that the FBI held off making an arrest for several weeks after discovering the crime because they hadn't believed at first that a woman alone could pull off what would turn out to be the largest municipal fraud in U.S. history. They were searching for her (male) co-conspirator, that is.

At this, my novelist antennae perked up. What would it be like, to live in the place you were born and raised, and now where you worked, while steadily bilking your neighbors and friends of millions of dollars? 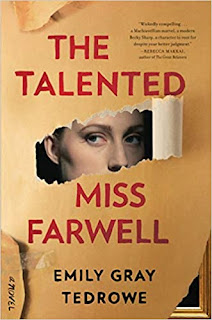 I resolved to imagine my own entirely-made-up character, Becky Farwell, and so I stopped following the details of the actual news story so I could preserve the space to create my own female protagonist who lives a double life.

And yes, my title is of course in homage to Highsmith's classic Ripley novel. I loved the idea of flipping our usual expectations of a con artist (namely, that he is male) by emphasizing the "Miss" Farwell.

I was also inspired by Highsmith's perceptive use of class conflict in Tom Ripley's climb to the top--in The Talented Miss Farwell, Becky too has to navigate social codes and learns the hard way how important it is not just to have money, but to have connections and access.

As for the "talents" referenced in my title, clearly Becky Farwell is talented in all sorts of ways, depending on who views what she does.

A: I was lucky enough to have a few people who generously offered their time and answers to my questions about smaller city government and accounting, as well as several legal aspects I needed to get straight on before writing those scenes.

What might surprise readers is that I didn't have to do as much research into the art world, where Becky pursues her passion for collecting, as one might have suspected.

No, I'm not a collector or even a super-experienced art connoisseur. But I have been deeply interested in the world of visual art for much of my life--as an avid museum visitor, a person who loves to wander through galleries, and even as the occasional subscriber to ArtForum or similar magazines. I love to read biographies of artists and follow the news about what happens at Sotheby's and Christie's.

So when it came time to write those scenes, I happened to have a wealth of information to draw on, simply because of an interest I continue to pursue.

Q: You describe Becky as having a "complex relationship with the truth." Can you say more about that?

A: The main goal I had for The Talented Miss Farwell was to effectively imagine and portray the inner life of someone, a woman, who could commit this type of extensive long-term crime. Who could sustain a double life, wholly on her own, for so many years. So one of the aspects I worked hard on was to search out what I felt the inner experience of her life was for Becky.

For example, Becky never calls what she does--even to herself, in her own mind--"stealing" ("so unsubtle," she believes). Instead, she has "the Activity." In this way I let Becky's own rationalization process inform her character, so that we get glimpses of how she navigates what she does.

Also, while Becky is regularly siphoning money away from her town in order to fund her art world buys, she is also frequently putting money back into the town coffers--money which is ill-gotten but often direly needed by the community. By doing this, Becky is able to tell herself, with varying degrees of persuasion, that she is doing good for her neighbors. Is that the truth? Not necessarily. But nor is it completely false either.

A: To be honest, given all that is going on right at this moment, I'd say: a satisfying reading experience, having had frequent moments of absorption, pleasure, and surprise.

A: A few months ago, on one of those stressful pandemic/quarantine days, I thought to myself, "Man, I wish I was working on a new novel that would completely take me away from the news, doom-scrolling Twitter, etc. Something light and funny, but smart, maybe even a little sexy. Something set in a tropical location maybe?"

Anyway, I'm working on that new project, custom-designed to let me escape our current difficult reality. Who knows if it will ever see the outside of my computer files, but it's a refuge for me these days and I'm glad for that.

A: Maybe just how very grateful I am to our indie bookstores during this hard time. Every one I visit is a gem. Let's all buy as many books as we can to show them our support. Also: thank you for the chance to talk about The Talented Miss Farwell!