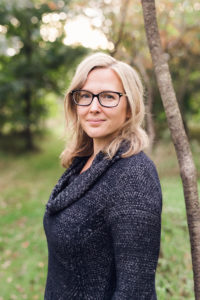 Jennifer Dugan is the author of the new young adult novel Verona Comics. She also has written the YA novel Hot Dog Girl, and has written the comics Gnaw and Circadia. She lives in upstate New York.

Q: How did you come up with the idea for Verona Comics, and for your characters Jubilee and Ridley?

A: In addition to writing YA novels, I also write comics, which means I spend a lot of time at comic shops and comic cons. I love people watching at those events, so it seemed like a natural fit to set one of my stories there.

I’ve also been interested in the dichotomy between so-called “big names” and “smaller names,” and indie comics versus those working with larger publishing companies.

I thought it would be really fun to explore that from the perspective of two teens who are only marginally involved in that conflict; enter Ridley the son of a corporate comics company with stores across the country, and Jubilee, the daughter of an Indie comics producer who also owns a single beloved local shop and relies on Kickstarter to fund her books.

As for Ridley and Jubilee themselves, I really wanted to present a girl character who was interested in the geeky stuff in her own right, and who also had her life relatively together. She is deeply passionate about her music and her family. 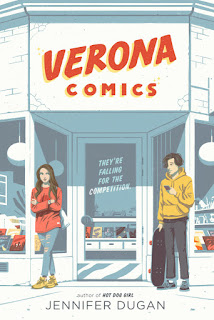 Conversely, I wanted Ridley, the boy main character, to be the one sort of floundering and struggling with various aspects of his life and mental health.

Q: Do you see the novel as an updated Romeo and Juliet?

A: To a certain extent I do. Verona Comics share some of the same themes and obvious nods to the famous tragedy; like the naming of the characters and the comic shop and, of course, I needed to find a way to rework the famous balcony scene… which now involves a deck and a very cranky cat.

Mostly though, I wanted to spin this idea of “star-crossed lovers” in another direction. I think this kind of all-consuming, us against the world type of love can be heavily romanticized in media. I really wanted to examine the toxic elements of relationships like that and the impact it can have on the people in them, even when they both have only the best of intentions.

I also wanted to leave readers some breadcrumbs to use as a roadmap out, in case they saw themselves in the characters, because the truth is the belief that “love can conquer all” can be truly dangerous depending on how it’s wielded.

Q: Anxiety issues are a major theme in the book--why did you decide to include that topic?

A: I think mental health is something that we really should be paying more attention to in teens. Young adults, especially queer young adults, deal with it a disproportionate amount.

Studies have shown that LGBTQ+ kids are twice as likely to feel depressed and suicidal, and four times as likely to attempt suicide as heterosexual youth. The rates of bisexual teens are especially high even within those stats.

A lot of that can be traced back to questions of identity and issues with community, which is something that I had Ridley and Jubilee both experience and deal with in very different ways.

However, while it was very important to me to show the realities of what living with mental illness can be like, I also wanted to demonstrate that there are many avenues for help. I didn’t want to vilify therapy or medication, but I also didn’t want to depict them as an immediate “magic fix.” My characters have to “do the work” as they say.

I also insisted on providing a list of resources at the end. Hopefully, that can serve as a jumping off point for anyone who reads this book and realizes that maybe they could use a little help, too.

A: That even though love may not conquer all, you are still deserving of it, and that help is out there.

A: I just turned in line edits on my 2021 release, Some Girls Do, which is a queer romance about an out and proud track star who falls for a closeted bi beauty queen with a penchant for fixing up old cars. It’s told in dual POV, like Verona Comics, so we’ll get a good look at each of the girls’ inner life throughout the story. It’s available to add on Goodreads now!

I’m also drafting another queer romance that I’m very excited to tell everyone more about soon, and will be sharing some fun news on the comics front very soon as well!