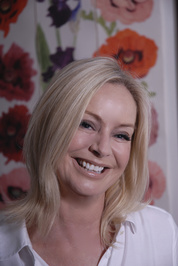 Samantha Norman is the author of the new novel Death and the Maiden. It is the final installment in the Mistress of the Art of Death series of historical novels started by her late mother, Ariana Franklin. Norman lives in London.

Q: How did you write this last installment of the Mistress of the Art of Death series?

A: I approached writing it by re-reading all the other novels in my mother’s series – which wasn’t exactly a chore – and probably the easiest and most pleasurable part of the process.

I took a heap of notes, especially about the character arcs and the details which I thought made the characters distinctive and went from there.

Q: What was it like to complete your mother’s work, and did you have a good sense of how she wanted the series to conclude?

A: Completing the series, I felt huge pressure and an unprecedented sense of responsibility both to my mum and her fans. 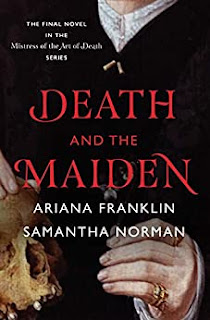 In many ways it was a gift because it meant that I got to spend time with her – I know it sounds strange and I’m not remotely woohoo – but there was a sense of communion with her; being in the world she loved and was so knowledgeable about, spending time with characters she had created and loved so dearly.

I did my utmost to stay true to her but, although the series was hers, this novel is also very much mine and therefore it concluded very much the way I wanted it to. I think she would have approved though. I really loved the ending and I would have had misgivings if I’d had a smidgen of a doubt about how she might have felt about it.

Q: How do you think your character Adelia has changed over the course of the series?

A: I think Adelia is pretty much as she always was, frailer and older obviously and perhaps a little softer these days but her fierce intellect remains very much intact.

Q: Did you need to do much research to write this novel, and if so, did you learn anything that especially surprised you?

A: The research was huge! I spent a very long time on that because, if there’s one thing my mother drummed into me, it’s that it’s extremely important to get things right. If I messed up at any point, it wasn’t through lack of trying.

There’s one passage in the book where I have to get one of my characters over a hermit’s bridge. It was common in those days for bridges to be maintained by hermits who lived by or under them and, to make a living, would charge people to cross them.

However, the currency in the 12th century was so chaotic and varied that it took me ages to work out how much the charge might be and in what currency – in the end I think I read more than five books trying to unearth that one piece of information.

A: Although I miss it dearly and may well return to the period at some point, I’m leaving the 12th century behind for a bit and I’m working on a supernatural thriller. It’s an idea I’ve been longing to do forever.