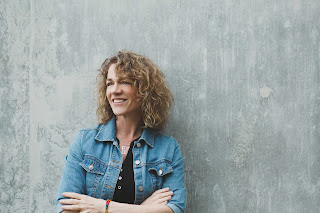 Robin Stevenson is the author of the children's book Pride: The Celebration and the Struggle. A newly revised edition of the book was released this year. Her many other books include Kid Activists and Ghost's Journey. She lives in Victoria, British Columbia.

Q: Why did you decide to write Pride?

A: I’ve been attending Pride since I was a teen-- it was an important day for me as a newly out queer young adult and it has continued to be important to me as a parent. I loved that Pride events showed my child that there were many kinds of families and many ways to express yourself, and that this diversity was something worth fighting for and celebrating.

So back in 2015, when I realized that there were no books about Pride for young readers, I decided to write one.

A: Of course I read a lot, both books and online, and watched documentaries and all the usual things. I also spoke with many, many people about what Pride meant to them—from activists in Uganda to teenagers in South Korea to former refugees now living in Canada. 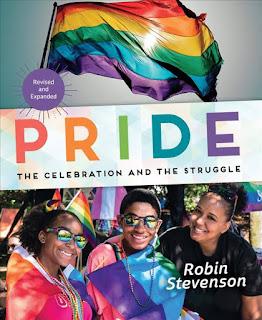 I was surprised by how much I didn’t know, particularly about the history of Pride and LGBTQ+ rights in Canada and the U.S. It made me realize how absent this history was in my own education. Even when I sought out this knowledge as a young adult, the version of LGBTQ+ history that I found was a very white-washed one.

So my understanding of Pride—how it evolved, what it has meant and what it continues to mean—definitely became more complex. I also feel a much stronger sense of connection to LGBTQ+ community as a result of writing the book, which I didn’t expect.

A: For young LGBTQ+ people, I hope it is an affirming, informative and enjoyable book. I think they have a right to know their community’s history and to see people who share their identities represented in the books they read.

For young readers who aren’t part of the community and may not know very much about it, I hope that it helps increase their awareness and understanding, and that this enables them to better support their LGBTQ+ peers and to stand up for equality and justice.

The book focuses on both the celebration of Pride and the ongoing fight for progress, and I hope that all readers will be inspired by the young activists whose stories are such an important part of this book

Q: What do you see looking ahead when it comes to LGBTQ rights?

A: Well, this is a challenging time. My first book about Pride came out in 2016, right after marriage equality came to the U.S., while Obama was president, and at a time that trans rights seemed to be gaining so much traction.

This new book came out in 2020, after years of attacks on LGBTQ+ rights by the Trump administration, a rise in hate crimes, dangerous backlash against trans rights, and of course, in the middle of a pandemic that meant Pride marches in North America were cancelled for the first time since they began 50 years ago.

I think it is clear that there is still much work to be done and a long fight still ahead—but in writing this book, I was very inspired and encouraged by all the compassionate and courageous kids and teens who are picking up this challenge and working so hard  to make our world a better place.

A: I have three books coming out in spring of 2021! Pride Puppy (Orca) is an alphabet picture book about a family spending a day at a Pride parade, and the illustrations are adorable.

When You Get the Chance (Running Press Kids) is a teen novel co-written with Tom Ryan, about two estranged cousins who reconnect and make their way to Toronto for Pride.

And Kid Innovators (Quirk) is a middle grade nonfiction book about the childhoods of inventors and trailblazers like Alan Turing, Grace Hopper, Alvin Ailey, Maria Montessori, and a dozen others. I am also working on a new middle grade novel—and will hopefully soon be starting on another nonfiction project as well.

A: I’d love to mention my picture book, Ghost’s Journey: A Refugee Story. If you have read my new Pride book, you will remember Rainer and Eka: they are a gay couple who fled Indonesia and came to Canada as refugees. Ghost’s Journey tells their story from the point of view of their cat, Ghost, and includes illustrations created from Rainer’s photographs.

It is a book that I wrote because of my Pride book, in a way—after learning about the dangers faced by LGBTQ+ people around the world, I wanted to do something to help raise more awareness of this issue.

Ghost’s Journey is also a fundraiser -- all my royalties from this book go to support LGBTQ+ refugees through Rainbow Railroad, Rainbow Refugee, or through Canada’s Private Sponsorship of Refugees program- so I am very grateful for any boosts people can give to this book!