Nina MacLaughlin is the author of the new book Summer Solstice. Her other books include Wake, Siren. She is a books columnist for The Boston Globe, and she lives in Cambridge, Massachusetts.

Q: What inspired you to write Summer Solstice?

A: What I love about the Summer Solstice is that it marks a shift in the year—the days start to get darker from there. It holds beginnings and endings—the opening of the summer season, the end of light lengthening. It’s a hinge, and there’s this compelling energy afoot that touches at time and transformation and forces in tension, connection, and opposition, so it holds a lot of the things that activate my imagination.

Q: One of the book's chapters is titled "Summer Is Made of the Memory of Summer." What role do you see memory playing when contemplating summer? Is it different from other seasons in that regard? 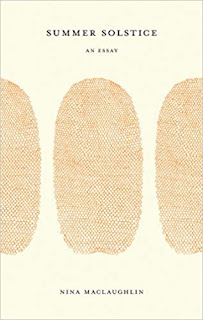 A: The rhythms of the school year sink into us, and summer, for a lot of kids, means freedom. In our nostalgic ideal, it means long days, no school, no homework, a warmer wilder time that has more to do with swimming and watermelon than grammar and times tables.

That sense, I think, continues to live inside a lot of people. The summer starts and people are returned to their youth, returned to a time of more time, when the only responsibilities involved choosing the right flavor popsicle and not forgetting bug spray. And I do think summer is unique this way—I think there are moments within other seasons that launch us back to kiddom, but summer’s is a sustained season-length nostalgia.

A: What I’ve found comforting in this strange and frightening stretch of time is that the light continues to shift, the peonies bloomed, the honeysuckle arrived, the birds were awake early, it was warm enough in the nights to go look at the stars, and now, the leaves are shifting, the nights are lengthening. Those grounding rhythms are still being offered.

This summer, for a lot of people, was stripped of a lot of the markers and events that define the season. Instead of a season of freedom and relief, it was a time of tension and dread. Which, in a very positive view, can result in making those moments when relief can be found, all the sweeter. Maybe it’s helped some of us see what we take for granted.

Q: You write, "Others exist, like me, ones who think of summer as something to get through, who enter into the force of their aliveness come fall." Why does fall bring you that sense of aliveness?

A: For me, experiencing the closing up of the year makes me more alert to death’s presence—which sounds morbid and dark!—but instead of fear and dread, it brings about this heightened feeling of aliveness. We’re all moving towards the same thing, the ultimate long dark, but we’re alive right now.

That’s what the fall makes me know. It stirs some deep in heat in me. Time is short! We’re alive right now! There’s a different feeling of urgency afoot.

A: Right now, I’m just beginning a series of essays on the Winter Solstice, a hauntier and more goth version of the summer series, which will appear on the Paris Review in December.