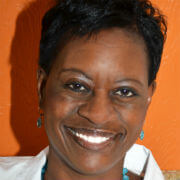 Katheryn Russell-Brown is the author of the new children's picture book biography She Was the First!: The Trailblazing Life of Shirley Chisholm, which focuses on the life of the first Black woman to run for president. Russell-Brown's other books include A Voice Named Aretha. She is the Chesterfield Smith Professor of Law at the University of Florida.

Q: Why did you decide to write a children's picture book biography of Shirley Chisholm?

A: She deserves a children’s book! I wanted to write about her as someone who for me had a larger-than-life persona, but who I really didn’t know much about. When I was in grade school, she ran for president and I remember she was treated very cruelly for having the audacity, as a Black woman, to throw her hat in the ring. 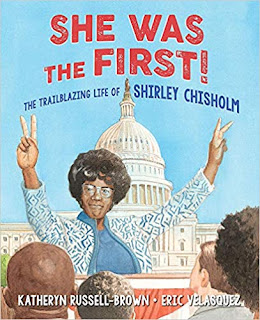 A: I was surprised to learn that when she was 3, her parents sent her and her two sisters to live with their maternal grandmother in Barbados. The Great Depression was looming and her parents were having difficulty making ends meet. Shirley and her sisters stayed for nearly seven years.

Q: What do you think Eric Velasquez’s illustrations add to the book?

A: He really brings Shirley and her world to life. What I think he does particularly well is to show Shirley as a well-rounded person, someone with intelligence, curiosity, determination, and stubbornness. He also shows the great contrast in warmth between life in Barbados and life in the U.S.

A: Stay tuned! More to come!

A: Please take a look at She Was the First! and let me know what you think!  @KRussellBrown; RussellBrownK@gmail.com