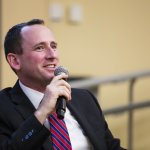 Eitan Hersh is the author of the new book Politics is for Power: How to Move Beyond Political Hobbyism, Take Action, and Make Real Change. He is an associate professor of political science at Tufts University.

Q: How did you come up with the idea for Politics is for Power?

A: As a political scientist, I have always been immersed in the scholarship on voting behavior. At some point, I took a step back from the details and thought about all the ways that ordinary citizens engage in politics – the news consumption and the partisan cheerleading and the online engagement and so forth.

And I asked myself: what does this all amount to? What actually are we doing when we spend time consumed in politics? Are we trying to influence the government through organized, goal-oriented, strategic action?

Mostly not. Mostly we’re serving our short-term intellectual and emotional needs. The goal of the book is to help the reader think about whether our core values of what we want from our communities and country are reflected in our actions. 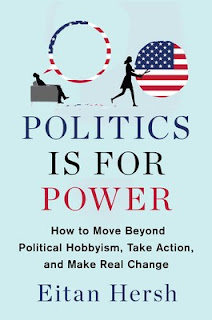 Q: One phenomenon you describe in the book is "political hobbyism." Can you say more about that, and about why it's a problem for liberals?

A: Political hobbyism is treating politics the way that obsessive sports fans think, write, read, and talk about sports. It’s amateur punditry, reading statistics or gossip. It is focused on instant gratification, seeking catharsis. It’s a catch-all term for the ways that most people who think of themselves as politically engaged participate in politics.

It’s prominent on both the left and the right, though in the Trump era it’s more common on the left. Right now, the typical person who spends an hour or two a day on political consumption (but no time in political volunteerism) is a college-educated liberal.

There are a number of historical/ideological/cultural reasons why political hobbyism is a bigger problem on the left than the right, which I address in the book.

To name a few themes, one is the left’s desire for greater changes to the status quo; another is the left’s focus on national politics over state/local politics; and a third is the left’s departure from local community engagement, such as religious participation. Each of these are big topics in their own right!

Q: Do you think this year's election has changed anything about how people engage in political activity?

A: Maybe yes and maybe no. This might be a moment like 2008, where a lot of Democrats were energized, shared viral videos, did some phone banking, made some $5 donations. As soon as that election was over, all the energy on the left collapsed. Without Obama on the ballot, turnout was low and activism was low. Maybe we’re reliving that moment. I’m not sure.

The metric I’m most interested is whether there is sustained, organized engagement.

For instance, a lot of Democrats attended a Black Lives Matter protest this summer. I’ll be looking to see if there is widespread follow-up in voting different people into local offices over policing issues.

Lots of Democrats are concerned about the environment. I’ll be looking to see if there’s widespread demand for states (including the most liberal ones) to pass climate-related laws, such as those affecting transit.

I’ll be looking whether the 2022 cycle showcases lots of competition for state legislative and congressional races on these issues.

In short, I’ll be looking for what happens when there is no celebrity hero or celebrity villain on the ballot.

Q: What do you see looking ahead when it comes to political activism?

A: In part, I see reason to be concerned. The nationalization of political news interest is a big problem. Many people are so infatuated with national news, national gossip, and big national solutions to problems and they expect almost nothing from their state and local governments.

On the other hand, I do see some reason to be hopeful. In the book, I highlight the activism of seven organizers, from age 19 to 98, who are completely inspiring and showcase how to get stuff done in politics, even as a volunteer with limited free time.

A: I’m starting a new book on the civic role of business leaders.

A: I would just say that this book isn’t meant to scold anyone that they’re doing something wrong. Rather, the goal is to help give readers a mirror into their own actions, to sit uncomfortably with the charge of “political hobbyism” and then showcase the beauty and power in doing politics a different way.

--Interview with Deborah Kalb. Eitan Hersh will be appearing virtually in a discussion at the Bender JCC of Greater Washington on Oct. 21.