Lenore H. Gay is the author of the new novel Other Fires. She also has written the novel Shelter of Leaves. A retired licensed professional counselor, she lives in Richmond, Virginia.

Q: How did you come up with the idea for Other Fires?

A: I’d been reading about Capgras Misidentification Syndrome. It is a medical condition, sometimes found in schizophrenia and dementia. Brain research revealed it can also be the result of a closed-head injury.

The visual cortex relays information through two routes. One route is the temporal lobe, which is linked to facial recognition, and one to the limbic system, which registers emotional reaction.

With Capgras, the route from the visual cortex to the limbic system is damaged, but the lobe is unharmed. Another person looks like a “mother,” “husband” or “wife,” but the patient has no emotional response – hence the patient believes he/she is seeing an imposter.

I wondered what sort of effect this syndrome could have on a family with children. I wondered how the injury might happen and decided a house fire could be the cause. 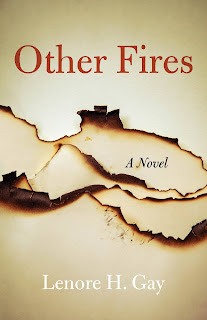 Q: Did you write the novel in order in which it appears, or did you focus more on one of your characters before turning to the others?

A: I wrote Adam’s character first. I found him an interesting young man who had repeated dreams on a similar theme. He learned about woolly mammoths watching television. He became interested in the extinct woolly mammoths, yet he hoped they still roamed the earth, against all odds. An electrician with a high school education, he was a daydreamer and dreamed about his adventures at night.

I imagined him meeting Joss, who had a Ph.D., at her burned house that needed electrical repairs after the fire.

The family was written together, except for Joss’s brother. I imagined each character and their ages and their personalities emerged. I knew her brother would become more real when he visited Joss’s family when he was an adult. Even though her brother lived far away, they had always kept in contact.

A: I didn’t make many changes along the way, except in the case of one character. I vacillated about that character’s fate and finally made a decision closer to the end of the book.

A: I hope readers will feel the way I did. I wanted to learn about each characters’ response to change, especially when a drastic event brought the change. How strong or weak would each character become? How did each character change as the result of a fire?

A: Currently I’m working on a sequel to my first book, Shelter of Leaves. There was a character in this book, a man called Sharp, whom I found mysterious and interesting. Since there were quite a few characters in the book, the plot couldn’t accommodate much of his story. I wanted to develop his story along with a woman named Sabine, who was the main character in Shelter of Leaves.