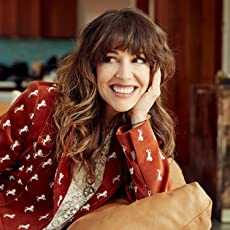 Tiffanie DeBartolo is the author of the new novel Sorrow. Her other books include God-Shaped Hole and Grace. She is the founder of Bright Antenna Records, and she lives in Mill Valley, California.

Q: How did you come up with the idea for Sorrow, and for your characters Joe and October?

A: The original idea for the story came to me while I was listening to a song called “Pink Rabbits” by The National. There’s a line in the song where Matt Berninger sings, “Somebody said you disappeared in a crowd/ I didn’t understand then/ I don’t understand now.”

I’d listened to that song a hundred times before, but on this particular day it conjured up a scene in my head — I saw Joe and October at a show, an outdoor venue. I could tell there was some kind of deep connection between them, and then I saw Joe walk away, and he didn’t come back. I was intrigued. I wanted to know more about both of them. I wanted to know why he left. So I followed him. That was the beginning of Sorrow. 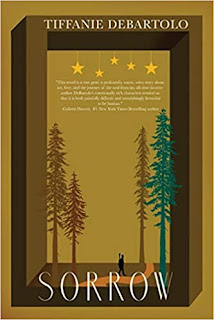 Q: You've said, "My creative work always seems to begin with my love of and passion for music." As a writer as well as the owner of a record label, can you say how the two coexist for you?

A: Let me start off by saying that it took me almost 10 years to figure out how to get my life as a writer and my life as a music business executive to coexist. For the first decade of my adult professional life I was a full-time writer.

When my husband and I started the record label, we imagined it was going to be something of a hobby, something we could do on the side. But, as anyone who’s ever started or run a business knows, if you’re committed to growing the company it will demand all of your time, and that’s what happened. Bright Antenna Records took over.

I desperately missed writing, but I couldn’t seem to figure out how to go from left brain to right brain well enough to work on a book. Until I had to, if you know what I mean. Until the desire for expression started gently tapping and then banging on the doors inside of me.

Q: You've said that you originally planned to write the novel from October's point of view, but switched to Joe's. What made you decide to focus on Joe's perspective, and what was it like to write from a male perspective?

A: Yes, so when I began the novel I began it in October’s voice. Not so much as a plan, per se. It was simply the point of view in which I viewed that first scene at the show. And I got maybe 35 pages in when I realized the story I wanted to tell wasn’t going to work from this POV, and I’ll tell you why.

Because imagine if you could only see the story from October’s eyes. Imagine how you’d feel for her, what you would think of Joe, and how you might judge him and his choices. You’d see his insecurity, his cowardice, but you wouldn’t understand it. You wouldn’t know why he felt or acted the way he does, and you probably wouldn’t like him.

So, I stepped into his shoes and started the book over. And once I did, everything opened up. Joe’s fragility and vulnerability really moved me. He’s sensitive and multidimensional, and I realized I was much more interested in being Joe than I was interested in being a spectator of his behavior — that is, I was fascinated to see the world through his eyes, feel what he felt, and see him the way he sees himself.

And I learned a lot about human nature by studying him, and by translating his beautiful humanity to the page in a truthful way, one that (hopefully) makes him likeable.

As for writing from the male perspective, that wasn’t difficult, to be honest. It doesn’t matter what gender a character is: once you step into their shoes and start looking at the world through their eyes, it’s their individual perspectives and experiences that inform you, their unique consciousness. The idea that men and women are so inherently different is a societal construct, in my opinion.

A: I didn’t know how it was going to end. Furthermore, I didn’t know anything about this story until I wrote it. This book was truly a treasure hunt for me as I was working on it.

What I would call the two biggest plot points of the story — I won’t mention them too specifically so as to avoid spoiling the fun for readers — but I’ll use code words — how about we call them “boyfriend” and “birdcage”? I didn’t see those two events coming until they happened. I didn’t understand what was happening in those scenes until Joe understood what was happening.

And that was super exciting. I was writing in such a way that I was experiencing these moments in real time with Joe, and it felt magical.

A: I’m about to start a new book! Of course, I have no idea what it’s about yet, but I can feel some nascent pushes and pulls toward a couple subjects that I’ve been interested in exploring. We’ll see…

A: That I love taking part in book clubs! If any book club decides to read this book, let me know — I’m easy to find on Instagram, or at the email address on my website — because I’d love to Zoom in and chat about the book with the group!