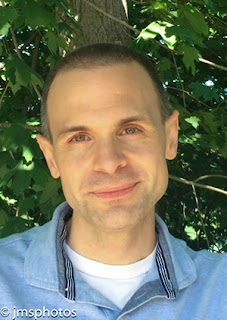 Jake Burt is the author of Cleo Porter and the Body Electric, a new middle grade novel for kids. His other books include The Tornado and The Right Hook of Devin Velma. He teaches fifth grade in Connecticut.

Q: How did you come up with the idea for Cleo Porter and the Body Electric, and for your character Cleo?

A: The idea for Cleo came from the same place most of my stories do: asking big what-if questions, then trying to come up with the most extreme answers. In Cleo's case, the question was, "What if drone delivery worked so well that we never needed to leave home again?" From there, it was a matter of coming up with a reason why people wouldn't leave home.

The obvious solution was a pandemic; I had lived through the SARS outbreak in China in 2003 (I was teaching at Shandong University in Jinan at the time). I certainly didn't expect Cleo to debut in the middle of another one!

Cleo herself had a different inspiration. At the time - and, unfortunately, persisting today - there were a great deal of stories in the news about people acting less than compassionately, especially toward immigrants. It made me crave a story about someone who's driving motivation was to be compassionate, no matter the stakes. And that's Cleo. 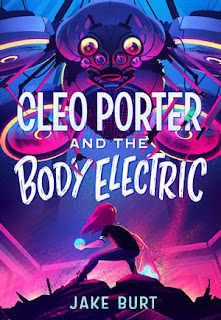 Q: Do you see any parallels between the current pandemic and the novel's backstory and setting?

A: There are many parallels; I think kids will definitely be able to sympathize with the emphasis that Cleo's society places on safety. I also think they'll connect with her encyclopedic knowledge of the human body and medicine.

I teach fifth grade, and every year I have students in my class who bring a laser-focused interest on certain topics. Sometimes it's baseball. Sometimes it's Pokemon. Sometimes it's horses, or dancing, or cars. Regardless, they devour information about it, and love sharing their knowledge. Cleo's inspired by those kids, only her thing is anatomy. She's studying to be a drone surgeon, after all...

A: I had to do quite a bit of research for the book, particularly into infectious diseases, how they're spread, and how societies brace to deal with them. And I did all of that research back in 2018, before COVID!

My favorite research, though, was into light: how it works, what the spectrum is, and how drones might use laser guidance to operate.

I found out that among chromaticists (people who study color), indigo is hotly debated; it's largely indistinguishable from violet, so some suggested it was only added so that the mnemonic ROYGBIV would have a vowel between the B and the V. I thought that was hilarious, even though there's relatively little proof of that theory.

Q: You said in our previous interview that this was your favorite of your books. Why is that?

A: Cleo is my favorite novel for a few reasons. First, it's science fiction, which was (along with fantasy) my favorite genre when I was a kid. I also like the tight framework of the book; all the action takes place over three days, which I felt upped the stakes and the pace.

Finally, there's Cleo. It was cathartic to write a character who cared so deeply about other people...and who made all kinds of mistakes because of it. That she is unwavering in her compassion will be, I hope, something that kids can hold onto in these tricky times.

A: I'm working on revisions for my fifth novel, an upper MG fantasy/horror tale...and that's all I can share for now...

A: Readers should know they can always get in touch with me - I love to hear from them! They can shoot me a message on my website, www.jburtbooks.com, or find me on Twitter (@jburtbooks) or Instagram (jburtbooks).