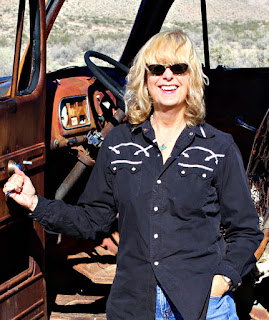 Lynn Downey is the author of the new novel Dudes Rush In. Her other books include Levi Strauss and Arequipa Sanatorium. She lives in Sonoma, California.

Q: How did you come up with the idea for Dudes Rush In?

A: Actually, the idea came to me. I’m a big fan of historical mysteries, since I’m a historian myself. A few years ago, I finished reading the latest Alafair Tucker whodunit by Donis Casey, and as I put the book down, I said to myself, “I’d love to write a historical mystery.”

In the next second, it was like someone turned on a movie projector, and the plot and characters of a story started rolling through my head. I had to grab pen and paper to write it down, and I kept notes as the book unfolded over the course of another couple of years.

Stephen King says that stories are found things, like fossils that you have to dig for. They already exist, ready to be brought to light. That’s how the process felt for me. Phoebe, Ellender, Mary, and all of the people in my book already existed; I just had to track them down.

Q: Although you've written works of nonfiction, this is your first novel. Was your writing process similar, and do you have a preference?

A: The process was very different from writing history. I used another part of my writer’s brain, which was pretty bare and cobwebby because I’d never used it before. When I finally had a block of time to actually work on the book, I was a bit nervous. How do you write a novel? So, I just put my you-know-what in my chair and my fingers on the keyboard and the words began to flow. 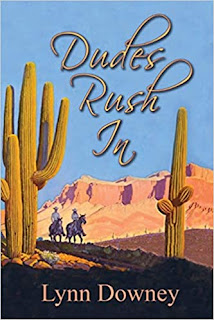 Fiction writers often talk about how their characters decide what they are going to do on the page, and I experienced that for myself. I’d be ready to send Phoebe McFarland off somewhere and she’d go someplace else. It was my job to let her decide. Most of the other characters did the same thing.

I love researching and writing history. I love to uncover stories about the past that no one knows about. I didn’t do historical-type research for the novel, but I did have to figure out who my characters were and what the landscape and buildings looked like, so I kept notes for that material much as I keep notes for my history books. But while history notes are facts, fiction notes are just stepping stones to follow.

A: I did know how the novel would end, but I took a different road to get there than I originally envisioned. That was due in great part to my wonderful editor, Annette Chaudet, of Pronghorn Press. She liked my story, but made some suggestions for ways to make it stronger, how to flesh out my characters, and create more drama.

As a first-time fiction writer, I was thrilled to see this happen while I did quite a bit of rewriting, which was both the hardest work and the most fun I’ve ever had as a writer.

A: I’m a historian of the West, and I’ve always been irritated at the way women are portrayed in Western fiction. Readers get nothing but stereotypes: self-sacrificing pioneer, spunky saloon girl, soiled dove, sexy outlaw, the unattractive widow who runs a boardinghouse, you get the idea.

I wanted to write about real women who live in the West and who are fully formed characters, not cardboard cutouts. In Dudes Rush In they are challenged, inspired, and ultimately changed by the West in ways that all women can relate to.

A: I’m writing my next history book: a cultural history of dude ranching, to be published in 2022 by the University of Oklahoma Press. The research for this book has been a blast, I’m uncovering some great stories about dude ranches, which have been around since the 1880s.

For example, movie star Gary Cooper had his own dude ranch for a few years in the 1930s, near where he grew up in Helena, Montana. And when the owner of the Valley Ranch near Cody, Wyoming, mailed out newsletters to his former guests, he put a sprig of sagebrush in every envelope.

A: I’m making plans for the next book in the H Double Bar dude ranch series, featuring Phoebe McFarland and all the other ranch characters. The working title is Dude or Die.