Tara Conklin is a writer and a lawyer. Her first novel is The House Girl. She lives in Seattle.
Q: How did you come up with the characters of Lina and Josephine, and why did you decide to write a story set in two different time periods instead of focusing on just one?
A: The character of Josephine Bell came to me very organically.  She appeared in a story I had written about Dr. Caleb Harper, a doctor who worked for a fugitive slave catcher, and I wanted to know more about her.  I really discovered her character through the writing.
The development of Lina’s character was similar, but she had certain jobs to do within the plot, so her personality – driven, very success-oriented – was shaped by the role she plays in the story.  I never really “decided” to write a dual narrative – the stories just evolved in that way.   Even as I was writing the historic sections, I felt that they wouldn’t remain there.  I wanted to bring them into the present day and examine them through a contemporary lens.
Q: Why did you decide to make art such an important part of your story?
A: Josephine was always an artist – this was clear to me from the earliest days of writing her story.  Her character was partially inspired by an exhibit I saw 20 years ago that showed the drawings of an African-American artist named Mary Bell.  Not much was known about her, but she was born a slave and later worked in the home of a wealthy Boston family.  I remember being very taken with her art and wondering what her life had been like.
When I started writing about Josephine, that curiosity returned.   I also thought that the art controversy (whether Josephine or her white mistress, Lu Anne Bell, made the famous Bell paintings) was an interesting way to look at questions of untold history: whose voices do we hear in the historic record?  Whose accomplishments do we celebrate today? 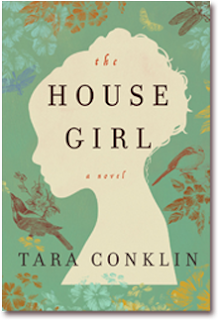 Q: Your modern-day character Lina is a lawyer, and so are you. Are there certain skills that transfer from working as a lawyer to writing a novel, in your experience?
A: Yes!  I actually wrote a blog post about this for Writer's Digest magazine. As a lawyer, I billed clients in 6-minute increments (as does Lina in the novel) and so I’m very aware of time and what can be accomplished in the course of an hour (or 6 minutes) if you really put your head down.  That has certainly helped me in writing fiction.
As a junior litigator, I spent most of my time researching and writing briefs, which required many of the same skills that I use now: developing a narrative arc, using persuasive facts, etc.   Fiction writing is also very different from legal writing, of course, and it’s certainly a lot more fun.
Q: What type of research did you need to do to write The House Girl, and how long did it take you?
A: I researched primarily online and at local libraries.  I read a lot of slave narratives, history books about the antebellum period and the Underground Railroad, and primary documents – letters, farm records – written during the time period.  It took me about five years to write The House Girl, although I was working full-time as a lawyer during the first three years, so I was writing very sporadically then.  In those early years, I didn’t even think that I was writing a novel – just some short stories.  But the stories kept getting longer and longer…
Q: What are you working on now?
A: I’m in the very early stages of working on book 2.  Not a lot is getting written yet, but the characters and story are taking shape in my brain.
Q: Anything else we should know?
A: I love visiting book clubs!  I can participate in person in the Seattle area or via Skype elsewhere.  Readers can reach me at tara@taraconklin.com or visit my website, www.taraconklin.com, for more information. 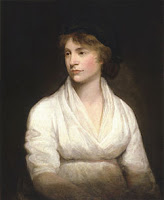 ON THIS DAY IN HISTORY
March 29, 1797: Writer Mary Wollstonecraft marries William Godwin.
Posted by Deborah Kalb at 6:18 AM No comments: