Rachel S. Cox has written for The Washington Post and CQ Researcher, and has been an editor at Preservation magazine and Time-Life Books. Her first book is Into Dust and Fire, the story of her uncle, Rob Cox, and four other young Americans who, six months before the United States entered World War II, volunteered to join the British Army.

Q: Did you often hear stories about your uncle as you were growing up, and why did you ultimately decide to write a book focusing, at least in part, on him?

A: My father spoke very rarely about his brother who was “killed in the war.” As a child, I learned a basic story of heroism. He had gone to help the British before America entered the war.


But I was left to conjecture about anything more. I would study the photographs and mementos my grandmother kept in her house in Vermont, where I spent vacations. Uncle Robbie was very handsome, he had played hockey at prep school, he won the “best boy” medal there. I knew my grandmother revered him, and that it would be very difficult to ask her for details.


Researching Into Dust and Fire was a kind of liberation from those familial constraints.  And the more I learned about Uncle Robbie and his four idealistic friends, the clearer it became that theirs was not only an inspiring story, but also a rip-roaring good yarn.


Q: How much research did you need to do, and what surprised you the most in the course of your research?


A: After World War II finally ended, my grandmother had her three sons’ letters home typed up and bound in leather. Fortunately, they were wonderful writers, so I knew a good deal about Uncle Robbie’s personal experiences. I had to find the families of the other four volunteers, and fortunately they too had saved letters. 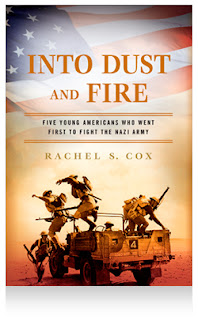 Being a journalist, not a military historian, I had much to learn about the war -- the early years from 1941 to 1943 and the war in North Africa, especially. I comforted myself that my own newness to the material would enable me to explain it very clearly to my readers. I had to get comfortable with the peculiar slang, the unfamiliar vocabulary, the cultural assumptions of the British military.  I was lucky to find a very generous British general to advise me, and I visited the Egyptian battlefields with a tour bus of Brits. In a way, my experience was similar to the fish-out-of-water adventure of my five characters, except that I faced no real danger. They, on the other hand, met with maiming and death.


Q: What was your family's reaction to the book?


A: I was of course nervous about my family’s reaction. I don’t think I could have written the book if my grandmother and my father were still alive, although the process of researching and writing made me feel very close to them. I was relieved when my one living uncle complimented the book. As for relatives of my own generation, I think that my siblings and cousins really appreciate finally knowing the full story of our mysterious missing uncle.


Q: How did you select the title Into Dust and Fire?


A: Into Dust and Fire, like all book titles, I imagine, represents a marriage of sentiment and practicality. I originally wanted to call the book His Majesty’s Yanks, and later The Gallant Americans, placing the focus on the character of the five volunteers and the selflessness of their decisions to fight under a foreign flag. The publisher, I think, wanted to evoke the fury and excitement of battle, to attract buyers who like to read about war.

I like Into Dust and Fire because it evokes the five naïve young Americans’ whole journey. The book is a coming-of-age story, among other things. Like all soldiers, they had to come to terms with the brutality of combat and the realities of war as they moved from comfortable lives in the U.S. to military training in England to the dusty, deadly crucible of the battlefield at El Alamein, Egypt, and beyond.


Q: Are you working on another book?


I have several ideas I’m researching, but, frankly, I am finding it difficult to put the five Yanks behind me. I’m still discovering new information! The family of the woman with whom one of my characters had a passionate, doomed love affair got in touch recently after finding my book on the internet. They have all their love letters, so I’m learning a great many new details about that part of the story.

--Interview with Deborah Kalb. Rachel S. Cox will participate in the Bethesda Literary Festival April 19-21, 2013. For a full schedule of events, please click here.
Posted by Deborah Kalb at 8:42 AM