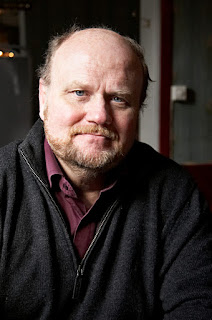 Ola Larsmo is the author of the novel Swede Hollow, now available in an English translation by Tiina Nunnally. It focuses on Swedish immigrants in Minnesota in the late 19th and early 20th centuries. Larsmo is a critic and columnist for the Swedish newspaper Dagens Nyheter.

Q: How did you come up with the idea for Swede Hollow?

A: The best stories are always the ones that you find in the shadows. Either they have been put there because we have forgotten, or because it is something you don't want to talk about... anyway, that's where you find the most captivating tales.

My wife Rita was an exchange student in Minneapolis in the ‘70s, and when we went back to Minnesota to visit her friends we stumbled upon this exhibition at the American-Swedish Institute. And I just stared at the pictures and asked myself: why haven't we heard more about this? 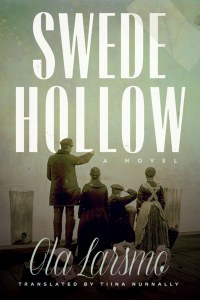 A: Well, we spent a lot of time doing research in Minnesota, and I had great help from the staff of the Minnesota Historical Society! You could find facts and figures about the place - the Swedish immigrants tended to stay in the Hollow longer than it was generally understood, in some families for up to three generations - but it was hard to find the stories of actual people. You didn't talk about your background in the Hollow.

So I only found one descendant who had done some genealogical research, Karna Anderson. That silence was surprising, but understandable.

Q: What do you think the novel says about immigration, and do you see common threads between the characters in your novel and immigrants today?

A: History never repeats itself, but it rhymes, someone smart once said. (I think it was Mark Twain.) I think that there are very obvious similarities between now and then - the demographic curve in central Africa today looks very much like the one in Europe in the 1850s, for instance.

And it is a sad fact that the immigrants who were the last to arrive always have to face the same prejudice - they are always considered lazy, criminal, unable to learn and so on... if you read the pieces about Swede Hollow in a newspaper like the St. Paul Daily Globe from the 1870s and 1880s you can see that poor Swedes were looked upon like that.

But then the Italians arrived and filled the bottom slot. And 10 years later the Poles started to arrive... the sad side of this is that people move on, but that prejudice stays the same. The sunny side is that people do move on.

A: A feeling of the place, I think. Swede Hollow is a magical place in itself, full of whispers....I know, I almost sound a little superstitious when I talk about this.

And also, I hope, a feeling that life is a drama everywhere, full of great feelings... and that readers might feel the respect we owe the people who did their very best to start a new life for themselves and their children - even if they didn't succeed. Historical fiction should give you a sense of the people who created the world we are living in today, and where it comes from.

A: My new novel, The Colonel, was published here in Sweden three weeks ago. It is also an emigrant story - about a dirt-poor boy from my home town, Uppsala, who ended up in several historically defining moments both in Sweden and the U.S.

He eventually became part of the religious abolitionist movement before the civil war, joined the Union army and was wounded twice in battle, but survived, and ended up as a colonel. A fascinating life, full of tragedy - and great achievements.

A: Oh yes - that you can read more about him and the book here:

Thank you for your kind interest.