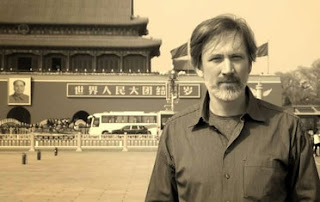 Eric D. Goodman is the author of the new novel The Color of Jadeite. His other books include Setting the Family Free and Womb. He lives in Baltimore.

Q: How did you come up with the idea for The Color of Jadeite?

A: The Color of Jadeite very much began as a “novel in settings.” After traveling through China and taking in the many exotic locations, I knew I wanted to do more than a travel story—I wanted to write a novel that would take advantage of the places and the culture. I had always wanted to write a thriller, and I thought this would be a great opportunity to send characters on a chase through China.

I needed a MacGuffin, and I didn’t want it to just be a guy searching for fortune. The more I learned about Emperor Xuande of the Ming dynasty, I felt it should be something related to him and his love of poetry, art, and the unusual. Creating a backstory that tied the main characters to the prize they sought gave the story more meaning.

Q: This is your first thriller--why did you decide to venture into this genre? 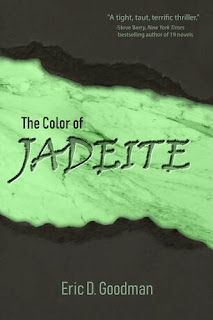 A: Most of my writing falls under the literary or contemporary fiction category—focused primarily on characters or ideas and their development. I also tend to examine perspective and how things can be seen from different points of view. This was my first A-to-B, one-person narrative that followed a linear path. I actually did find that to be more of a challenge because it required more planning ahead and more plotting and outlining.

For most of my writing I tend to know where I’m headed and where to begin and a few pivotal scenes in between, but I feel my way organically through a novel or story. Because Jadeite has so many locations, characters, and interactions between them, I had to pace everything so one element didn’t get ahead of the others. Planning everything out without following the urge to just write it took some restraint.

My next novel is back in the literary light, but I suspect I’ll be slipping back into the thriller shadows again for another novel soon. It was an enjoyable and worthwhile challenge.

A: A lot of the research came before I went to China, anticipating what was to come, and while I was there—field research, if you will. But then, as I was plotting out the novel and working on the first draft, I did a good amount of reading, online searching, and documentary watching about China and its history and culture.

Perhaps the most surprising thing I discovered was Emperor Xuande of the Ming Dynasty—he was a renaissance man of sorts who dabbled in poetry and art. Not only servants and yes-men, but critics after his reign hail his work as being of merit. And his palace of beautiful monsters seemed interesting. It is his jadeite tablet that the main characters seek in The Color of Jadeite, so some of this backstory is revealed.

But I’ve considered writing a short companion novel based on Xuande and set in his time, perhaps ending with his presentation of the jadeite tablet to his love. (I should specify, though, that the tablet itself is fictional, based only on his interests.)

A: Perhaps more than my past novels, this is primarily a thriller intended to entertain readers—so I think the best take-away would be for a reader to have enjoyed the adventure. That said, I tried to make the characters unique and different, creating tension and passion within the group in addition to the struggles of their search.

So I hope readers also take away a sense of who each character is and some love—or hate—and understanding of them. And the sense that some things are more valuable than financial wealth, and that sometimes forbidden love is forbidden for a reason.

A: I’m working on a short novel called Wrecks and Ruins that is actually a sequel of sorts to a short story I wrote years ago. That story was “Cicadas” and it took place in 2004. “Cicadas” was published in an anthology of Maryland writers and featured on Baltimore’s NPR station, WYPR. This book picks up 17 years later—when the cicadas return in 2021.

I have a few other ideas germinating for other books, and a dozen or so pages of notes fleshing them out, so it may be up to a publisher to decide which novel first sees the light of day.

A: I’d like to give a shout-out to Apprentice House Press and small presses in general. Small presses are still providing an option for authors who haven’t been brought under the wings of the big five publishers, but who don’t want to go down the self-publishing path.

That said, small presses have very little budget for marketing, and that makes it all the more important to have readers spread the word, whether sharing with a friend or posting a review on a blog, Goodreads, Amazon, or another source. For readers to share your blog posts is also a big help.

So if you enjoy The Color of Jadeite, please review it or rate it or let other readers know about it. That’s true of any book, but especially those published by small presses. Finding readers can be as big a challenge as finding an ancient jadeite artifact.