Patrick Hjertén is the author of the novel Mr. Pink. He is based in Sweden and England.

Q: How did you come up with the idea for Mr. Pink, both the book and the character?

A: It all started with my best friend, Irina, introducing me to Fifty Shades of Grey. The films, not the books. The first one we watched on DVD. The other ones we went and saw at the cinema and made a thing of it.

When the third film was out, I was in Sweden and I flew to England with the sole purpose to watch it with Irina. She asked me, "Why don't you write a Fifty Shades of Grey but with gay characters?" The idea was brewing in my mind, but I forgot about it for a long time.

It was at Christmastime that I started to think about what a gay Mr. Grey would be called? Mr. Pink, naturally. The character, the man, Mr. Pink is a mix of different things. He has a lot of darkness in him, and dark characters are usually more fun to write about.

I took some inspiration from J.R. in Dallas and Angela Channing in Falcon Crest. I loved those series when I was a child. I also took inspiration from myself and my own experiences. I threw everything in a pot, seasoned and stirred, and there he was.

A: I sort of knew how I wanted it to end when the story settled in my mind. My first thought was to write a book only filled with sex, but when I started down that road, it felt so boring. I needed something else. 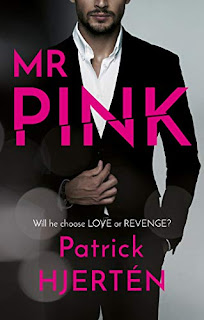 At the same time as I started writing, I watched a TV series, Riviera, with Julia Stiles and Lena Olin. The series was partially about art and art fraud. That triggered me to add art fraud to my story. Instead of Mr. Pink being a total sex maniac, I turned him into a man with a quest for revenge who uses art fraud as a means to an end. I still kept the sex partly because Mr. Pink uses sex to get what he wants.

And as I was writing, you could say that it partly wrote itself, that the characters went in directions that I had not thought of first.

A: I hope that they will have a good time with Mr. Pink. I see before me that they sit there with some bubbly and chocolate. I feel that the whole experience should be about indulgence. I also hope that they take away with them that the characters are well-rounded and that there is always a backstory to why a human is who they are.

I am not good at writing a story like Agatha Christie’s. I don't think I could come up with a surprising twist. My writing is more about humans, their emotions and the experiences that have shaped them. Human behavior is really thrilling to me.

A: I love books by Anne Rice. My absolute favorite is not the ones about vampires but one called Violin. It is a compelling story, and she has a very sensual language. Another favorite is her son, Christopher Rice, and his debut book A Density of Souls. Just like his mother's, his language is sensual and he has fleshed out characters and there is always a twist at the end.

A third favorite is Iain Pears and his book An Instance of the Fingerpost. It is the same story told from three (if I remember correctly) people’s perspectives and the end is really surprising. It was a long time ago that I read it, but now I feel that it is time to revisit.

A: I am doing the final edits on a book on marketing for Swedish high school students that will come out in 2021. I have started the sequel of Mr. Pink. I actually started with the epilogue, and now I will find out which way Mr. Pink is going to get there. I am on the fence which way I want him to take.

I am also halfway through a story that I started a year ago that I need to finish. I call it my "experiment." I got the idea when I read a short notice in a newspaper while waiting for a train to London.

A: More is to come, and I am excited to enter the U.S. market. The USA has always held a fascination for me through what I saw in pop culture. I also had the sense of feeling at home when I was in Los Angeles and New York. I want to see more of the U.S., and I admire your attitude of "If you work hard, you can achieve anything."

That is quite different from Europe ,where the feeling is more like, "Don't think that you are something. Don't think that you can amount to something." The U.S. way of thinking appeals to me, and it is more like I am. I had relatives who left for America in the 1800s and the beginning of the 1900s. I suppose there must be someone on the other side of the Atlantic who is connected to me, and I would like to find them.