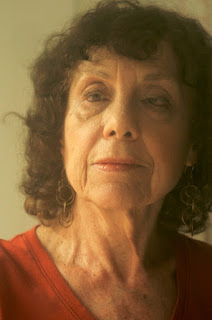 Lynne Sharon Schwartz is the author of the new story collection Truthtelling. Her many other books include Rough Strife and Leaving Brooklyn.

Q: Over how long a period did you write these stories?

A: Most of them were written over the last two or three years, but a small handful, the more conventionally realistic ones, were done earlier.

Truthtelling, my fourth book of stories, takes a decidedly different turn from my earlier work. I unexpectedly found a new voice taking over, a bolder voice that disregarded ordinary probability and veered off onto paths that followed the logic of imagination rather than daily reality.

They’re not fantasies, nothing supernatural happens, but the events that take over are so unlikely as to be practically impossible.

This adds a comic element, naturally, but aside from the humor I wanted the events to follow the logic of the inner life, which as we all know is far different from the way we behave in reality.

Q: How did you decide the order in which the stories would appear in the collection?

A: This is always a tricky element in organizing a book of stories. In collections focusing on one theme, or where the same characters reappear in various stories, it’s important to have a clear through line. But in most collections, like Truthtelling, the decisions about order are kind of arbitrary.

Years ago for my first two collections, my great editor Ted Solotaroff advised, “Put a really strong one at the beginning, another strong one at the end, and then just toss the others in anywhere.” I liked this advice. But in recent years the matter of order has been much discussed and toiled over, unnecessarily, I think. 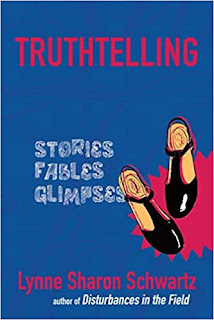 Because Truthtelling is a mix of realism and the super-real, I interspersed the realistic stories, which are fewer, among the other, more recent ones. I wanted to give the reader a sense of the variety of the collection and not get stuck in a groove, so to speak.

Constant surprise is what I aimed at. The reader should feel a sense of vertigo, veered back and forth between the real and the improbable until the differences start to merge. That’s when we have to question the truths of our daily reality.

Q: The book’s subtitle is “Stories, Fables, Glimpses.” What do these designations mean for you?

A: I like that question because, given the variety and different lengths of the pieces, I thought calling them simply stories would not be accurate. Some, like “Apples,” “Near November,” or “A Few Days Off,” are fables in the old-fashioned sense, similar to fairy tales that lend themselves to larger interpretations.

Some are so brief that they are actually glimpses, in the sense that they’re not developed in detail the way conventional stories are: for example, “Grief,” or “The Middle Child,” or “Castles in the Air.” They don’t have the usual trappings of a complete story but are like a detail of a painting magnified, a magnification that in its brevity manages to deliver the essence of a situation.

And “Stories” are what we all know as stories, thorough, traveling through a complete and satisfying arc.

Q: What role does the concept of truthtelling play throughout the collection?

A: Well, it’s the title of the first and one of the most complete stories, and encompasses the arc of a married couple’s lives. In their advanced age, when breaking up or a serious rift would probably not happen, they tell each other dangerous secrets they’ve kept hidden for years. And it ends calmly, even lovingly: they accept the truth with the wisdom of age. The title is literally what the story is about.

In other stories, such as “The Strong One,” or “The Middle Child,” or “Career Choice,” extreme situations bring out the truth about the characters, truths that the usual run of days often leaves hidden.

But in general, the new and bolder voice I mentioned above offers the truth in a combination of the real and the not-quite-real, the imagined, the release of a hidden inclination. Because the truth about life situations and relationships is not always visible, overt: it lives in the inner reckonings and imaginings of the characters involved.

A: At the start of our forced isolation in March because of the corona virus, I started a novel, thinking it would keep me occupied and also distracted from the awful situation that still continues. It’s about amnesia: a thirty-something man is hit by a bicycle and suffers a blow to the head that erases his memory, whether temporarily or for good I haven’t yet decided.

He’s fortunate because his wife is located, who takes him home where he finds he has three children. But who is he? Does he love these children? He’s also an actor by profession. There’s an irony in his having to play a role within the family, really make up a role, while he also plays a role on a TV crime show.

I don’t know yet where this will all lead. The only way to find out is to keep writing and see where the words take me.

Q: Anything more we should know?

A: Truthtelling is my 28th book and I’m happy that I’m able to keep going after so long. I didn’t start publishing until I was about 40, but by that time I had several manuscripts in a desk drawer that came out one after the other (once my first novel, Rough Strife, was nominated for a National Book Award and a PEN/Hemingway First Novel Award). So it seemed that I was a very fast writer!

I started writing as a young child and have since published work in every genre—fiction, essays, poetry, and translations from Italian—except playwriting. I don’t think I could ever write a play because I like to write the stuff between the dialogue.