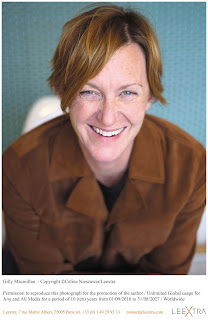 Gilly Macmillan is the author of the new novel To Tell You the Truth. Her other books include What She Knew and The Perfect Girl. She lives in Bristol, UK.

Q: How did you come up with the idea for To Tell You the Truth, and for your character Lucy Harper?

A: I’ve been wanting to write a novel where an unreliable narrator was the central character for a while. I gave a lot of thought to who that person could be and the more I considered it, the more it seemed that a fiction writer would be the perfect unreliable narrator.

Who else spends the majority of their time in an alternative reality, and relies so heavily on their imagination day to day that some confusion between reality and fiction might be understandable or even inevitable.

Giving Lucy a childhood imaginary friend who has stayed with her into adulthood and crept into her fiction as a character added another level of unreliability to her character. I think many writers weave elements of their real life into their fiction more than readers might imagine and Lucy is no exception.

Q: Can you say more about what it was like to write about a mystery writer? 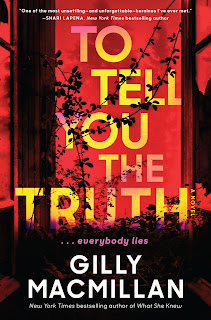 A: It’s a world I know inside out so at first it was a lot of fun to think about it in terms of a story, but as the book progressed it also became a little creepy. To create a suspenseful story, I had to look hard at my profession and my work habits and ask myself in what ways things might go wrong and become a little twisted, or sinister. That wasn’t always comfortable.

Q: The Publishers Weekly review of the book says, "Macmillan is a master of misdirection." What do you think of that description?

A: I’m very flattered. It’s a terrific compliment for a suspense writer. When you’re working on these kinds of novels, one of the biggest things on your mind is whether you’ve done enough to stop the reader from guessing what’s going to happen. I always assume my readers are smarter than me, so I find it a challenge. I’m delighted that I succeeded for the Publishers Weekly reviewer.

Q: How was the book's title chosen, and what role do you think truth has in the story?

A: We struggled to come up with a title for the book for a while. I was talking to my agent one day, and she said, apropos of something else, “To tell you the truth…” and we both froze, and said, “That’s it!”

A: I’m working on a novel about three very different women who unexpectedly find themselves on a weekend away without their husbands. After arriving in a remote, off-grid location they find a letter addressed to all three of them, which suggests something deadly might have happened to one of their spouses. I hope readers will love it.

A: I hope readers enjoy To Tell You the Truth and thank you very much for having me on the blog.