Thomas Harding is the author of the new children's picture book The House by the Lake. It focuses on a house in Germany where his family used to live. His other books include a nonfiction book for adults, also called The House by the Lake, which looks at the same house. He lives in England.

Q: Why did you decide to tell the story of the House by the Lake in a children's picture book?

A: As a young child I loved them. I still have many of my favorites on my book shelf. Later, as a teenager, I worked in a children’s bookstore. There I learned the range of picture books that are available. When I had my own kids I loved reading to them every night. So I have always loved picture books.

Once we had rescued the lake house and restored it to its former beauty, we opened the building to the public. That’s when I saw children walk around in wonder.

They touched the bullet hole made during the house-to-house fighting between Russian and Germans at the end of World War II. They stared at the metal and concrete chunk of the Berlin Wall still jutting out of the garden between the house and the lake. They examined the sunflower wallpaper inside the house and looked over the view of the lake. 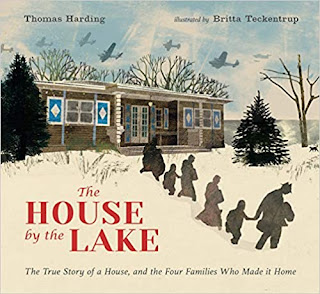 And I suddenly realized how these young people were fascinated with this history and I wanted to find a way to tell them this story.

Q: How did you choose what to focus on in the picture book, as compared with the--obviously much longer--book you wrote for adults?

In the nonfiction adult book, the focus was history and facts, based on the evidence I had gathered. Through the house, the reader has the chance to witness 100 years of German and European history.

In contrast, the picture book is about what it’s like to love the place you live and then to have this taken away from you. It’s about how wonderful a house can be — being with your friends and family, eating tasty treats, enjoying the local nature — and it’s also about darker times, about angry men coming to your door, about fire in the sky and freezing cold nights. And it’s about working with others to build a brighter future.

Most of all it’s about the difference between a house and a home. The former is a structure, a shelter. A home, though, is the place where you feel safe. Whether it be a tent or an apartment or a house or a place, it is the place you leave and come back to, share meals with friends and family. A place of connection and memory.

Q: What do you think Britta Teckentrup's illustrations add to the book?

A: Britta’s pictures are remarkable. She has produced stunning pictures that capture the character, tone, personality and emotion of the house and the characters who lived there. I feel so lucky to have worked with her on this project.

My grandmother described the lake house as her “soul place.” Somehow through her genius, Britta has captured this in her illustrations.

Q: What do you hope young readers take away from the story you tell in the book?

A: I have recently completed a story for young adults about what’s going to happen over the next 30 years. It’s called Future History. I like to tell people that it is nonfiction. My next project is a book about Britain’s role in slavery and what we should do about it today.

A: My dog is a German Shepherd and his name is Seymour. His best friends are Franny and Zooey, our cats.