Gail Hovey is the author of the new memoir She Said God Blessed Us: A Life Marked by Childhood Sexual Abuse in the Church. She lives in New York's Lower Hudson Valley.

Q: You've said that you started writing a novel rather than a memoir. Why did you decide on a memoir, and how long did it take you to write the book?

A: She Said God Blessed Us was always a memoir. Long before, beginning in the 1970s, I wrote three versions of a novel that told a story of seduction and love between a woman teacher and a teenage girl.

Four in the Morning explored the younger woman’s confusion about her sexual identify. I chose that title because four o’clock in the morning is the middle of the night, but it is also morning. Both/and. Not either/or. The novel was a search for a non-binary identity long before I had heard the word. I wasn’t ready to think about abuse when I wrote that novel.

In the late 1980s, when my third agent finally gave up trying to find a publisher for the novel, she said, “It’s too gay for the straight market and too straight for the gay market.” I have no way of knowing if that’s true. What I do know is that very little has been published about women sexually involved with girls.

I realized I had to write my story as memoir. She Said God Blessed Us was finally published just this summer. 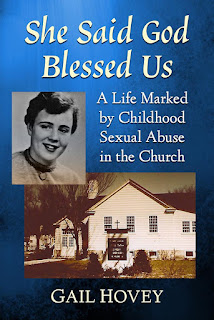 A: What I learned over the course of the many years it took to write the book was that I was searching for language. My early experience not only violated religious codes and civil laws, it was deeply secretive, hidden and outside the realm of ordinary existence. I could not take in and understand what had happened to me because I didn’t have language even to think about it.

Writing the memoir, I reflected on the meaning of love, of abuse, of assault, of complicity and responsibility. Finally able to choose the words that described my experience, I felt like an honest woman in the world for the first time.

Q: How was the book's title, She Said God Blessed Us, chosen, and what does it signify for you?

A: To talk about the title of my memoir, the subtitle is essential, A Life Marked by Childhood Sexual Abuse in the Church.

My working title was What Goes by the Name of Love. My publisher wanted an explicit title: the perpetrator was a woman; it was abuse of a child, and it happened in the church. Publishers get to choose titles. The hardest word to find was “marked.” If the title had to be explicit, it had to say that the memoir covers the whole of my life. It is a story of the life-time impact of childhood sexual abuse.

A: I hope readers will take away the humanity of and my love for all the people in my book. I hope they will puzzle over the age at which we become responsible, as I did for myself and for my son. I hope they will see that without language we can’t understand our own experience. I hope they will reflect on how the mind can be colonized, so that the loss of self is not even perceived.

I hope readers will come away with an appreciation of how our understandings of ourselves sexually can change over time and of how abuse marks a life, for life.

A: I wrote a memoir

it took me more than twelve years

It’s mid-October 2020. Not to mention the pandemic, the U.S. election is a mere three weeks away. What am I working on? Letters to get the vote out, donations to candidates and organizations, protests to save the postal system and to encourage civility and voting.

A: If LGBTQ+ people had been honored and treated with the same respect as everyone else throughout my whole life, it would not have taken me decades to realize that what was wrong was not that I loved a woman, but that she was an adult and I was a child.

I had a difficult time finding a publisher. It’s impossible to know why. Could it be that it’s deeply uncomfortable to take in that a woman religious teacher can sexually abuse children? Could it be that such a person is thought to be so rare that there would be no interest in such a story? What I do know is that I cannot be without company. I am curious to see what the publication of my memoir helps to bring to light.

Please visit my website for more about my memoir and my work: hoveygail.com.