Nicci French (the pen name for the wife-and-husband writing team of journalists Nicci Gerrard and Sean French) is the author of the new novel House of Correction. Their many other books include Sunday Silence and The Lying Room. They live in Suffolk, England.

Q: How did you come up with the idea for House of Correction, and for your character Tabitha?

A: We suddenly got intrigued with the idea of a woman who has to solve a crime from her prison cell. So she can’t do any of the normal detective activities like visiting the crime scene, calling on witnesses and so on.

That seemed exciting but the book really took off for us with the character of Tabitha. We wanted an outsider, a woman who had hit absolute rock bottom, abandoned by everyone, including her own lawyer. We wanted to explore what it took to come back from that. And in a strange way, Tabitha, fierce, independent, bloody-minded, took control of the novel and led us through the story. 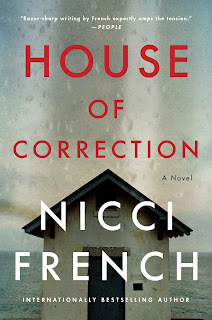 Q: The novel takes place primarily in a prison, a courtroom, and--mostly through flashbacks--the small village where Tabitha lives. How important is setting to you in your writing?

A: After we’ve decided on a story, the key discussions are first, who does this have to happen to, whose journey is this? And then, second, where does this story have to take place?

As we’ve said, the prison was part of the original idea. We’ve visited numerous prisons and we really wanted to convey the horror of being locked up. But the setting of the crime was also crucial. It had to be a particular kind of remote English village, with only one road in or out. It’s a tiny community where everyone knows everyone and everyone has their secrets.

Q: The book includes a focus on clinical depression. Why did you decide to include that subject in the novel?

A: We needed to begin this story by making life as difficult as possible for poor Tabitha, throwing every obstacle in her way. She’s in prison, her actual home isn’t a real home. Perhaps worse than that, she doesn’t even have a refuge in her own mind.

Apart from being a mystery story, we always thought of this as someone trying to save herself and also to heal herself. We were determined to treat her depression seriously. It’s a terrifying, mysterious condition and there are no easy cures.

Q: Did you know how the book would end before you started writing it, or did you change things around as you wrote?

A: We think of our books as a journey. We may not know the route in every detail but we know where we want to end up. Among other things, this story is a sort of “locked room” mystery that happens to take place in the open air. By this we mean that it seems that nobody else apart from Tabitha could possibly have committed this murder. So this was really a story we couldn’t just make up as we went along.

But the emotional journey was something different. As we got to know Tabitha while writing the book, she dictated her own progress from the dark into the light.

A: We’ve written another book, called Black Crayon. It’s about a murder in which the only evidence is a drawing of it by a 3-year-old girl.

A: We’re currently thinking of writing a different kind of thriller, that would be by Sean Gerrard instead of Nicci French. Really.