Ben Sheehan is the author of the new book OMG WTF Does the Constitution Actually Say?. A former executive producer at Funny Or Die, he is the founder of OMG WTF, which mobilizes and educates young voters.

Q: What would you say are some of the most common perceptions and misperceptions about the U.S. Constitution?

A: One misconception is that we fundamentally have the right TO vote in the Constitution. While Congress can make or alter the regulations around the times, places, and manner of our federal elections, our elections are largely run at the state level. This includes the fact that each state gets to decide who can (and can't) vote.

Nowhere in the Constitution does it say that a particular group of people can or can't vote, and the famous voting rights amendments just protect voting rights for citizens (if they already have them) based on race, age, sex, or tax-paying ability. 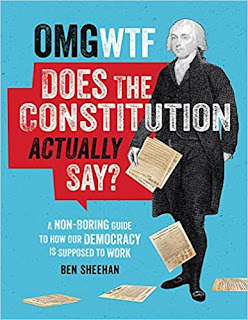 Q: You write that "civics isn't some ditchable elective--it's vital stuff." What approach would you take to teaching civics in this country?

A: If it were up to me (and it isn't), I would ask each state to pass a law requiring three full years of civics education in schools: 4th grade, 8th grade, and 12th grade. I would also ask that each state require the completion of those courses, as well as passage of the citizenship test, in order to graduate.

Right now, only eight states require a minimum of one year of civics education. By not teaching our kids how the country works, we're harming ourselves.

A: I read several scholarly articles about the Constitution, different interpretations, and explanations from a wide range of sources. I used a mix of citations spanning the ideological spectrum. I also had constitutional law professors read it and give their notes.

One particular area of fascination is the power of state legislatures; we call them "down ballot" races but in reality they hold a staggering amount of power.

Q: What do you think people should know about the Constitution as they cast their votes this year?

A: The power of each office they're voting for, from their indirect vote for president and vice president to their direct congressional, state legislative, and gubernatorial votes, plus their state judicial elections and county races. All of these jobs are quite powerful in our lives, in different ways.

A: A kids version for release in 2021! I worked with an amazing illustrator and co-author, and I'm really proud of the work they did in adapting my book for an 8-12 audience.

A: That you can already cast a ballot in the majority of states! So make sure you go vote as early as possible.

--Interview with Deborah Kalb. Ben Sheehan will be participating in a virtual talk at the Bender JCC of Greater Washington on Oct. 21.