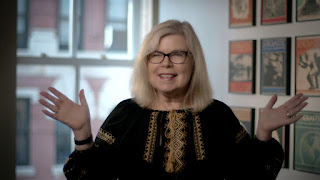 Marsha Forchuk Skrypuch is the author of Trapped in Hitler's Web, a new middle grade novel for children. Her many other books include Don't Tell the Nazis and Making Bombs for Hitler. She lives in Canada.

Q: Why did you decide to focus on your character Maria, who also appeared in Don't Tell the Nazis, in your new novel?

A: I initially thought that Don't Tell the Nazis would be a stand-alone novel, but many readers wanted to know more about Maria and Nathan, and what their lives would have been like, running into the Reich in the hopes of hiding and surviving the war. I was also curious myself because I had friends and family whose ancestors had survived by doing exactly this.

Q: You note that your father-in-law's experiences informed this novel--can you say more about that? 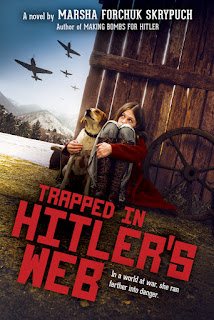 A: My father-in-law, John, was a 19-year-old medical student in 1941 when the Nazis invaded Ukraine. Soviet soldiers fled the oncoming Nazis, but as part of their scorched earth evacuation plan, the Soviets tortured and executed tens of thousands of Ukrainians, targeting those who were young and had an education -- just like John.

The Soviet Secret Police (NKVD) came to John's home to arrest him but he evaded them. Having survived one military occupation by a hair, John didn't want to stick around for the next, so he escaped the war zone by hopping onto a train going into the Reich, planning on hiding in plain sight in the less populated rural areas, far from the fighting.

John hid out in German farm country throughout the war, doing heavy labor on remote farms, and while he was treated like a slave and feared for his life almost daily, he was more fortunate than people living in the killing zone. When he finally got to a refugee camp at the end of the war, he was emaciated and sick, and he nearly died of typhus.

Like many people of his generation, the way he coped with his war survival was to try and put it out of his mind, but a few years before he died, he let me interview him about his experiences.

A: That there are many unknown facets to stories you may think you already know. We must read widely and keep an open mind. Empathy is key.

Q: What kind of research did you do for this novel, and did you learn anything especially surprising?

A: I had never written a novel set in 1942, and had never written a novel set in rural Austria, so this was a huge learning curve for me. I read a variety of first person accounts of the time and place from as many different perspectives as I could to supplement face to face interviews. I also delved into archival material for day to day accounts from the area, farming practices and so on.

The thing that surprised me the most was how effectively kids were manipulated by the Nazis. They knew to get kids when they were young by having both boys and girls who met the Nazi physical and genetic ideal enrolled in Hitler Youth programs where they were taught that they were special and were given better trips and treats than most anyone else, including their own families.

Parents weren't even allowed to hug their children once they were in the Hitler Youth. They could shake their hands and that was it. And children weren't to think of their parents as mother and father anymore because Hitler was their father. It was so chilling. I have nightmares about this.

A: I'm in the midst of edits for book 3, which is as yet untitled, but is about Maria and Krystia in the weeks following the end of the war. I've also begun research on a new novel (or is it three?!) that takes place in the years leading up to World War II.