Tim Green is the author of Final Season, a new middle grade novel for kids. His many other books include Baseball Genius. A lawyer and former NFL football player, he was diagnosed with ALS in 2016. He lives in upstate New York.

Q: In a note to readers at the beginning of Final Season, you say that although this book was easy to write in some ways, in others it was extremely difficult: "Reliving the many painful moments and scenes of my ALS diagnosis and the slow but steady physical deterioration made the writing more like work than ever before." Why did you decide to write this novel?

A: I write first and foremost to entertain kids. So, I'm always looking for stories, in my imagination or from my past experiences, that will keep kids turning pages, have lots of action and tension. That's the dough.

Then, I sprinkle in a little humor, swirl in generous portions of life lessons, kindness, tolerance, honesty, forgiveness, and whatever else is in season.

It's important to have subtle life lessons. Kids don't need to choke on them. Final Season had all those elements and more.

There are three main plot lines to draw the reader through the story at a hand-clenching pace. 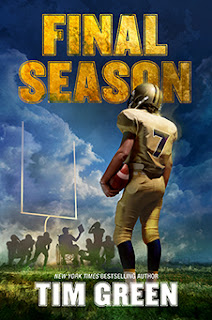 First you have the family dealing with the father's ALS diagnosis, his mortality, and the question of whether the main character should continue to play football considering what is happening to his father.

The second plot line is the football team and whether they can muster a perfect season on their way to a championship against their vaunted archrivals.

The third plot line is Thea's story, a tough but pretty girl breaking stereotypes and trying to find her place on the team as well as what her friendship really means.

All these elements together make this story, which is half truth, half fiction, my most compelling yet.

Q: You based your characters on your own family and other people you know. What do they think of the book?

A: I haven't let any of the characters read it except my family members because I wanted to give them a chance to have me edit any inaccuracies.

I'm proud to say that there were no corrections. Their reactions were all the same. They couldn't put the book down, but they were all saddened by the plight of the father, and maybe of the kids.

Q: How would you describe the relationship between your character Ben and his dad? 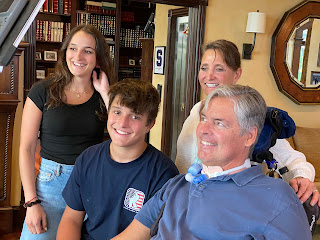 A: I wanted to create the type of relationship between me and my youngest son, Ty. So, I would have to say that they are very close with tremendous amount of love and respect between them.

A: I hope kids are entertained, but I also hope they take away some of the messages from the book.

In the end, Ben must make a decision about whether to play football or not and I think it's important for kids not to feel pressure from their parents to play sports.

I also hope kids learn to not make judgments on people based on their appearance, like the team did with Thea because she was a girl.

Perseverance is an important takeaway from the story. Ben perseveres during the game, even when he is hurt. If you want to be a champion, you will have obstacles you need to overcome.

A: I am currently working on a memoir called ALmost famouS. It is about my pursuit of and near misses with fame in football, sports television, network television, writing, and politics, and my discovery of something vastly more important through my battle with ALS.

A: I am donating every dollar I receive from writing Final Season to ALS research at Mass General Hospital.