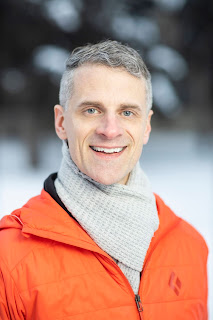 Joseph Holt is the author of the new story collection Golden Heart Parade. His work has appeared in a variety of publications, including The Sun and Prairie Schooner. He is on the MFA faculty of the University of Alaska Fairbanks.

A: Golden Heart Parade came together over 10 or 12 years. The collection has nine full stories and five flash fictions, and in most cases the early drafts would look like odd, distant cousins beside their finished forms in the book.

For instance, the oldest story, “In My Life with Carl Lehmann” (in which an old burnout recounts a friendship from his heady art school days), dates back to 2008 or so. Another story, “Fricassee” (where a feckless husband tries preparing an anniversary dinner for his wife), probably dates to 2009.

My early drafts were fairly graceless, because back then I was still learning the techniques of fiction.

Once I’d gotten more practice—reading more widely, returning to graduate school, teaching the concepts that I myself needed to learn—I began seeing new possibilities for my “finished” stories, many of which had already appeared in literary journals.

In that regard, I’m lucky it took so long to publish my first book. I needed time to get better. The stories in Golden Heart Parade are now more nuanced and mature, since I had the opportunity to revise them so deeply. 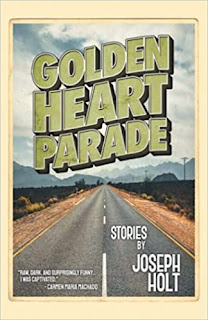 A: Ordering the collection was like when I was a teenager assembling a mix-tape for friends. You don’t want to lead with a ballad, nor do you want to stack two songs in the same key. Whatever keeps the listener listening, or the reader reading.

So I guess variety guided my decisions—variety of length, tone, voice, setting, and point-of-view.

The collection opens with a brief, action-heavy story: “Worst at Night,” in which a father and his teenage daughter dispose of a violent-but-now-unconscious intruder at the father’s farmhouse. In mix-tape terms, that story is a straightforward rocker, engaging and energetic.

Later on, the middle story is “Make It Yours,” a metafictional tale of a highway worker who eavesdrops, so to speak, on a deaf couple performing sign language in their home. That story is more structurally complex, like a prog composition, so it made sense placing it like a centerpiece.

Golden Heart Parade also has five meditative flash fictions, which serve like reprises throughout the collection.

A: I have a long answer to that question, but I’ll try being brief. To me, “Golden Heart Parade” suggests a procession of hopeful, humane characters. These are active, joyful people—neither angelic nor blameless, but motivated by sincerely good intentions.

It seems to me that lots of literary characters can be dour, inert, and insensitive, the sort you’d avoid in real life because they might drag you down as well. By contrast, the characters in Golden Heart Parade take action, offer help, cut jokes. They look outward into the world, searching for ways to contribute.

That said, when the manuscript was accepted for publication by Santa Fe Writers Project, its title was “Your Nightmare.” That’s totally different.

The collection contained a flash fiction by that title, which didn’t really fit, so I replaced it with a piece called “Golden Heart Parade.” (The new title was inspired by the city in which I live, Fairbanks, the “Golden Heart City.”)

Q: What themes do you see running through the collection, and what do you hope readers take away from the book?

A: If anything, these stories seem to demonstrate that our lives are richer when we’re surrounded by other people. That’s a big claim coming from me, who’s lived alone all of adulthood.

Back in 2007 at the Tin House Summer Workshop, Steve Almond suggested that many fiction writers begin their stories with a character alone in a room, depressed, since that’s the very situation of creative writers at their desks.

But, he said, there’s little hope for drama when you enclose someone like that. You need to send your protagonists into the world, where all sorts of adventure and chance encounters await. That’s how we escape our ruts and navigate a newer, more promising future.

A: Right now I’m revising a novel manuscript in which two radio deejays search for a young woman they witness trying to hang herself. It sounds dark, but it has a lot of comic elements.

I was inspired by the communal optimism in Frederick Barthelme’s Second Marriage, one of my favorite novels, and the branching narratives in Pacific by Tom Drury, perhaps my favorite living writer.

It’s very fun working on a longer project. I mean, drafting it was messy and stressful, but I love the process of cleaning it up, deepening the characters, and sharpening the imagery. I’m hoping to share the novel before too long.

A: Yes—I’m very happy to extol the virtues of small, independent publishers. With Santa Fe Writers Project, I was allowed to participate in the production process—everything from cover art to interior design to marketing copy.

My publisher, Andrew Gifford, has given me a real education in book production. Best of all, he let me refine the manuscript after it was accepted for publication.

The result, I believe, is that Golden Heart Parade is built to last. I’m proud of the work now, and I know I’ll be just as proud in 10 or 20 years. That’s due less to my efforts than to the care and attention shown by my publisher and his editorial team.