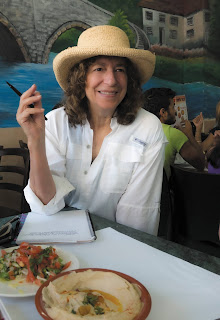 Dorothy Kalins is the author of the new book The Kitchen Whisperers: Cooking with the Wisdom of Our Friends. She is the founding editor-in-chief of Metropolitan Home and Saveur magazines, and the former executive editor of Newsweek. She lives in New York City.

Q: What inspired you to write The Kitchen Whisperers?

A: I realized that I did, literally, hear people talking to me as I prepped and cooked.

As I wash my lettuce from the farmers market, I remember a French grandmother telling me to be sure I washed my salad greens three times. Every time I cook pasta, I hear Marcella Hazan’s warning not to add salt to the water until it boils. If I go to make cornbread or biscuits, I hear the Mississippi tones of Lola Mae Autry guiding me through handling the flour (not too much!).

As I began to test the idea. I asked friends and even people I just met, about being influenced by people they knew and cooked with, rather than cookbooks, or cooking shows. As people’s eyes seemed to light up with recognition I knew I’d found the central idea of my book.

Q: You begin the book, "Alone in the kitchen? Impossible!" What do you see as the communal or unifying aspects of cooking?

A: We all have these voices, these memories, these techniques and quirks with us as we cook, even if we are alone. 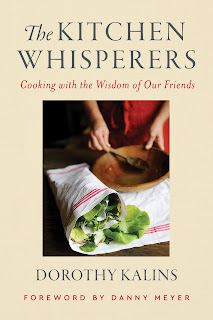 In The Stomach Club chapter, I talk about the joys (and occasional frustrations) of cooking with a group of friends. As long as nobody bigfoots it, I love the camaraderie, the nuttiness, the sheer joy of cooking with others.

People gathering together around fire to prepare something to eat is as old as civilization itself. The wisdom of our friends stays with us, life-affirming and joyous.

Q: Of the various memories you include in the book, do you have a couple that resonated even more than the others?

A: Once I began to write, I found myself treasuring the discoveries I was making. Cooking with your friends is a chance to be together, to have unstructured time, to talk about family, about life…the things you’d never get to over the phone or in an email. I have sorely missed such cooking intimacy during this pandemic.

It is impossible to ever forget the lessons I learned cooking (or watching) the chefs I’ve had the great good fortune to produce cookbooks with.

Michael Anthony’s quiet expertise could encourage me to try the scariest thing he ever cooked: a leek tart from V is for Vegetables. Mike Solomonov is the funniest serious cook I’ve ever met.

But really, if I had one wish it would be to cook again soon with Christopher Hirsheimer, now the chef at Canal House Station in Milford, N.J.,  because I learn always, by watching her, and, well, girls together in the kitchen: we get to talk about everything!

Q: The Publishers Weekly review of the book says, "While each memory is a pleasure to savor, what resonates most is the how these stories will inspire readers to take stock and appreciate their own whisperers." What do you think of that assessment, and what do you hope readers take away from the book?

A: Oh yes, nothing makes me happier that to hear from someone who’s just read the book saying that it reminds them of someone in their own life. This ratifies and legitimatizes the hand-me-down kitchen practices I write about.

A: After the brouhaha around The Kitchen Whisperers settles down a bit, I will begin work with Mike Solomonov and Steven Cook on producing a big follow-up to their award-winning cookbook, Zahav, with Zahav At Home.

That is a huge project. Even though the restaurant recipes we showed in Zahav were extremely cookable, our next challenge is to translate their basic cooking methods and ingredients to the home kitchen.