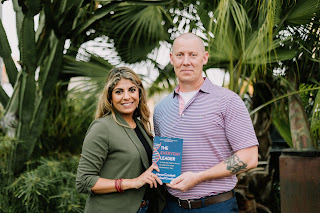 Q: What inspired you to write The Everyday Leader?

A: Early in the pandemic we were noticing that our clients were reaching out asking about coaching and training for their managers; that their leaders didn’t really know how to lead in a remote environment.

What we uncovered through various conversations with the clients was that some of the leaders struggled to lead pre-pandemic as well through no fault of their own. Simply put, they weren’t provided with a foundation of leadership to build upon.

So, we started talking about the differences in leadership between the military and business worlds and realized that in the Marine Corps, every individual is taught the same leadership principles from day one.

What we realized is that these underlying principles aren’t that different between the military and business and that anyone can be a leader regardless of their level, title or role.

Q: How were the 14 traits you write about in the book chosen?

A: The Marine Corps actually chose these traits for us! These 14 Leadership Traits are the traits the Marine Corps teaches to every single new recruit and the traits that are further instilled into every leader the higher up they go in their military career.

The last chapter of the book is called Putting It into Practice. 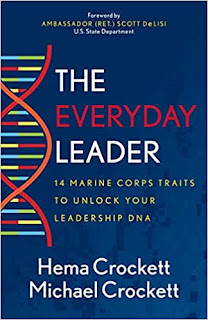 A: We have a Putting it into Practice section at the end of each chapter culminating with this final chapter because for us it’s important that readers personalize these traits.

We want them to take a look at their own leadership style, consider the 14 Marine Corps traits we discuss, but also think about others that are meaningful to them and to start practicing these traits and incorporating them into their everyday lives.

We wanted to create a guidebook to leadership versus just telling people that these particular 14 traits will make you a leader overnight.

A: Funny enough, we didn’t think about what it would be like to write a book with each other until after we were finished writing.

We worked to have deadlines to hold each other accountable and being together for the past 17 years helped us know how the other responds to stress, so we knew when to give each other some space. Overall, it was a fun process, and would we write another book together? Who knows, maybe!

A: Right now we are working on getting the book out there into the hands of as many people as possible because the world could really use strong leadership as we redefine what our work and personal lives look like in this (semi) post-Covid world.

We are also focused on growing and expanding our company Gig Talent, which Hema co-founded with Jamie Jacobs.

A: We wanted to write a book that was relatable to most people and we wanted to people to expand their view and definition of leadership – one that may have been based on a level, role, or title to one that is broader where anyone can be a leader.

Plus, we wanted to bring out the day-to-day leadership that exists in the military world, which can be a bit more relatable (and funny).