Niall Williams and Christine Breen are the authors of the new book In Kiltumper: A Year in an Irish Garden. Williams' other books include the novel This Is Happiness. Breen's other books include Her Name Is Rose. They also have written several other books together. A husband-and-wife writing team, they live in County Clare, Ireland.

Q: What inspired the two of you to write In Kiltumper?

Niall: There is a line in a James Taylor song, “Look up from your life,” and some element of this probably occurred to me at the end of 2018.

Most of the time I am too busy living to look at our life, but some sense of its frailty and wonder struck me, and I had an impulse to mark and celebrate the fact that for 35 years we have been trying to make a writing and gardening life here in Kiltumper.

Christine: During 2019 I was still not out of the woods with regard to what I call my cancer surveillance. Scans, scope, blood tests every six months and final visits to oncology in a Galway city hospital.

The garden writing was a way of focusing inward because it's contemplative and meditative, and yet outward because the garden is so physical.

In some ways I think it's as if we had some premonition of what was to come and of the isolation that the pandemic would bring and gardening was a sort of cure.

Q: You write, “Places not only become marked by people, but people by places too.” How have you been marked by your garden, and it by you?

Niall: The garden is an expression of the marriage of its people and its location. The things that grow here, as first imagined and then nurtured by these people. In the book we acknowledge that two other people in this same place would make a different garden. (As too they would write different books to the ones Chris and I have written here.)

Christine is the artist of the garden, the trace of her hand is everywhere. In the colour palette she has chosen, and which plants where, and what next to what, (which changes all the time as she changes) there is a visible, living map of her own spirit.

In my own case, being marked by the garden is something it has taken me some time to realize. But what I have come to understand is the gift it has given me to be living inside such beauty, and also to be as close as I am to the cycle of seed, rise, bloom, and decline that is part of my everyday.

Christine: The garden has given me an artistic expression. As many people who garden remark, it’s like painting with flowers and plants and I am still only learning.

I like to think of my ancestors in the same place. If only the soil could speak to me. My ancestors might say, My, how Kiltumper has changed since our day. I think they'd be pleased.

Q: You've collaborated on other writing projects before. What is your writing process like when you work on a book together? 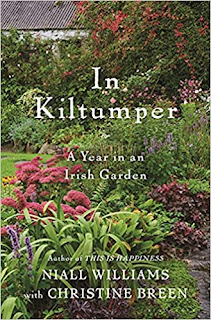 Niall: We have always worked together. Part of this comes from the idea that we undertook the adventure of life in Kiltumper together. A joined leap, as it were.

Our first four nonfiction books about life here grew out of this giant ledger we kept of our early days, Chris writing each day on the left-hand page, I on the right. From the same lived day, two very different sets of observations. We have always both read, and made comment on, each other’s work, and Chris has always been my first reader.

For this book, I drew on my garden notebook, where some notes are made often mid-job, shovel downed, and an observation scribbled, to be deciphered and expanded later.

I wrote my sections and then passed them to Christine. She sometimes wrote, dialoguing as it were, or simply added her own piece. The idea that emerged I think is something of the way one plant “responds” in the garden to the one next to it.

Christine: What he said.

Q: A review of the book by Cahir O'Doherty on IrishCentral.com says, "In order to get a read on the wider world, the pair decided to focus on the particular, on the human scale and the local, and especially on the little piece of earth they tend to themselves. Their sense of urgency is heightened not just by geopolitics, but by the passing of time." What do you think of that description?

Niall: I am approaching the halfway point of a new novel, set in Faha, four years after the end of This Is Happiness.

Niall: That we are grateful to our readers, who have let us live this writing and gardening life, and we are always happy to hear from them.

Christine: We are becoming grandparents in September!