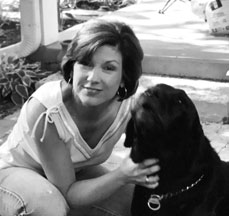 Candace Fleming is the author of The Curse of the Mummy: Uncovering Tutankhamun's Tomb, a new middle grade book for kids. Her many other works include the new children's picture book What Isabella Wanted. She is based in Chicago.

Q: What inspired you to write The Curse of the Mummy, and what do you think of the idea of the mummy's curse?

A: I’m thrilled to be here to talk about my book, Deborah. I’m excited about it. After all, who doesn’t love stories about curses, mummies and buried treasure? And the best is, it’s 100 percent true.

As for inspiration, lately I’ve become obsessed with re-examining those often-told tales from history with new eyes – eyes of the 21st century.  I think every generation needs to reconsider how it tells the true stories from its past. Memory, after all, is a powerful force in the way society evolves.

And so I wanted to pose some different questions to young readers about the opening of King Tut’s tomb, questions like: Why were rich, white men from Western countries basically allowed to treasure hunt in Egypt? Why were they allowed to literally appropriate that country’s treasures? And why did the Egyptian people have so little say in any of it?

As far as I know, no other middle grade book about the tomb’s opening has addressed this side of the story.

Then, too, the book also asks readers to consider Tutankhamun – that once-living, breathing teenager – not as an archeological artifact, but as a human being who sacrificed so much – his tomb goods, his mortal remains in the name of science and knowledge. I really think that’s important.

And then there’s that persistent curse. For better, or worse, it’s part of the story. Kids know about it from movies and TV shows. It, too, needed to be addressed. But how?

It occurred to me that the curse and all the stories reported about it at the time would be a great hook into the larger story. Kid readers come for the curse, and leave with a better understanding of archeology, colonialism and ancient Egypt. 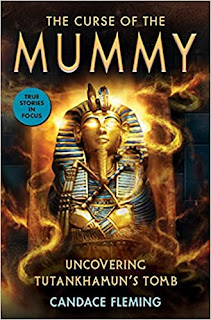 How do I feel about the curse? It’s nonsense, of course, just a story created by a press eager to sell newspapers to an utterly fascinated public. But let’s face it; it’s also super fun.

Q: How did you research the book, and what did you learn that especially fascinated or surprised you?

A: I went to Egypt, can you believe it? It was, seriously, the best research trip ever. Being there – literally stepping into history – changed everything I thought I knew about this story. I really believe landscapes speak, and temples and tombs hold memories.

Sure, I gained a clearer understanding of ancient Egypt’s historical periods. I even learned to read hieroglyphs. More importantly, though, I discovered how cool and silent it is inside a tomb, and how the rock in the Valley crunches beneath your feet, or how the pink of an October sunset reflects on the Nile.

I climbed a summit, following a path taken by Egyptians for thousands of years to look out across the vastness of countryside where I could clearly see the line between the cultivated land and the barren desert. For the first time, I truly understood why ancient Egyptians believed it was the boundary between the world of the living and the world of the dead.

And… this is hard to explain… but all my senses became completely engaged. So did my imagination. When I finally came face-to-face with Tutankhamun, I cried. And I mean cried, big, gulping, sloppy tears. I just felt this sudden, overwhelming sadness, as if I was mourning him 3,300 years after his death. I even mumbled an ancient prayer while there, one I’d learned in my research.

I also dug around in the vast material at Oxford University -- Carter’s letters, and diaries, his unpublished autobiography, as well as hundreds of archival photographs of the discovery are all housed there. And I read hundreds of newspaper reports written in the 1920s about the tomb’s discovery and excavation. 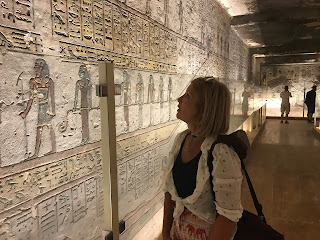 The most surprising – no, shocking – thing I learned was that when Howard Carter and anatomist Dr. Douglas Derry performed their autopsy on Tutankhamun, they cut the arms from the body to slide off Tut’s gold bracelets.

They cut the torso in half, too, and sawed off the head before using a chisel and hammer to gouge out each body piece from the coffin.

This has been sort of secret for a long time. This brutal treatment of the body does not appear in either Carter’s published account of the autopsy, nor Dr. Derry’s autopsy notes. In fact, when photographs of Tutankhamun’s head were taken post-autopsy, a piece of cloth was wrapped around the neck to conceal what the men had done.

I found their treatment brutal, indecent, and sacrilegious, and completely surprisingly considering Carter’s usual methodical approach to the tomb. I still don’t understand it.

Q: What do you think accounts for the ongoing interest in King Tut's tomb?

A: It’s the mystery of it all. Treasures are hidden – in pyramids, in underground tombs, in sarcophagi. There are false doors, hidden stairs. Even hieroglyphs require a code (the Rosetta stone) to understand them. And all this is enveloped in the ancient Egyptians preoccupations with death.

Then, too, there’s the Howard Carter story: an underdog archeologist, granted one last season to dig by his wealthy patron and partner, Lord Carnarvon, uncovers the greatest find in Egyptology. But what happens at the moment of their success? Carnarvon dies. Was it a curse? Seriously, I couldn’t make up a better story.

A: I want them to come away from this book going, “Wow, that was a great read, as exciting, fast-paced and edge-of-your –seat as fiction.” I am, after all, a storyteller, not a fact-teller. I want kids to love my nonfiction in the same way they love fiction… with the added bonus that my stories are 100 percent true.

A: Currently, I’m working on a middle grade nonfiction book for Scholastic about the teenaged girls who worked at Bletchley Park in England during WWII.

Incredibly, some were as young as 14, yet they were deciphering Nazi communications and saving British lives – and they didn’t even know it! The place was that secretive. Oooh, it’s such a good story.

A: I’ve got a new YA nonfiction title coming in Spring 2022 called Murder Among Friends. It’s my first foray into writing true crime, and I had a blast researching and writing it.

It’s about two rich, intelligent and teenaged boys – Richard Loeb and Nathan Leopold – who in 1924 attempted to commit the perfect crime.  What follows is a nationwide manhunt, a deep-dive into the teens’ psyches, and a court hearing called the “trial of the century” by the press. Can you tell I’m excited about it?