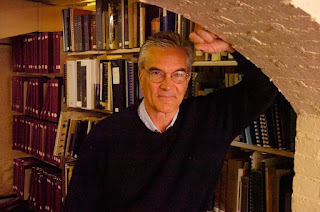 William Sargent is the author of the book Crab Wars: A Tale of Horseshoe Crabs, Ecology, and Human Health, first published in 2002 and now available in a new second edition. His many other books include A Year in the Notch. A former director of the Baltimore Aquarium, he is a consultant for the NOVA Science series.

Q: What originally inspired you to write Crab Wars, and how did this second edition of the book come about?

A: As a kid growing up on Cape Cod I became intrigued with horseshoe crabs. I would row out under the full moon to watch them spawn. There would be no sounds save for the quiet scraping and scratching of shells as the ancient arachnids clambered over each other to lay and fertilize their eggs.

There would be a heady sense of creation because it was in shallow warm waters like these where life first evolved. So like the renowned ant expert E.O. Wilson who never outgrew his bug phase, I never outgrew my crab phase.

Shortly after finishing grad school I started a small marine biology lab in my parents’ attic on Cape Cod’s Pleasant Bay. Every summer students would flock in from all over the country to do research on the bay’s unique ecology.

We discovered the bay was also the main collecting area for a new biotech industry based on the brilliant blue blood of these creatures that have existed unchanged for over 450 million years.

Our research became the focus for a NOVA film and this book, which is about the bay’s beleaguered population of horseshoe crabs. Today 90 percent of the crabs in the bay have puncture wounds and fungal infections from being bled for their blood.

I wrote the second edition of Crab Wars because now all the syringes, vials, and vaccines used to fight Covid-19 are being tested for bacterial contamination with an extract of horseshoe crab blood called lysate.

Q: You write, “Today the medical uses of horseshoe crabs are almost common knowledge.” What are some of the most important uses? 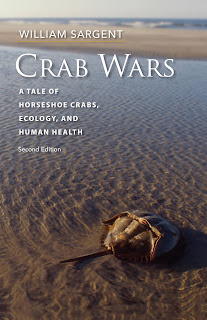 A: Most of what we know about human vision comes from research on horseshoe crabs. In 1976, Dr. H. Keffer Hartline won the Nobel Prize for his research on the optic nerve of the horseshoe crab that runs from their two compound eyes to their brain. The brain lies in a circle around their mouths so they eat through their brains.

Anything that comes in contact with the human blood system has to be tested for bacterial contamination and the way that is done is with horseshoe crab blood. It is the only commonly practiced medical procedure that depends on a species of wild animal and that animal is declining up and down the East Coast.

Q: What are some of the changes facing the horseshoe crab population since the first edition came out?

A: The increased demand for horseshoe crab blood has put pressure on collectors to collect female crabs when they are mating in the shallower waters near the beach. This has led to a drastic reduction in the population of the next generation of the arachnids.

In turn, this has led to federal court cases in Massachusetts and South Carolina to stop the practice in state and national parks and wildlife refuges.

South Carolina has also ruled that horseshoe crabs can only be used for biomedical purposes and not for bait.

This makes both common sense and medical sense. If you keep the crabs alive and use them for lysate each crab is worth $1,500. If you chop them up and use them for bait they are only worth about 30 cents a pound.

Fishermen report that the ban is not a hardship because species like spider crabs work just as well to bait their conch and eel traps.

Q: What do you see looking ahead for medical research involving horseshoe crabs?

A: The Swiss company Lonza has started using gene splicing to produce a synthetic version of lysate that doesn’t require bleeding live crabs.

But the FDA hasn’t approved the synthetic lysate in this country because they didn’t want to switch horses in the middle of a pandemic.

But the writing is on the wall. When the pandemic calms down the FDA will approve the new form of lysate and the industry and its lucrative horseshoe crab fishery will come to an abrupt end. Horseshoe crabs will then have another million years or so to recover. Can the same be said for humanity?

A: I just finished a book about the accidental origins of Covid called The Ferret Sneezed, and I’m working on another book whose working title is Living on the Edge, about the effects of Covid on the world’s environmental crisis.