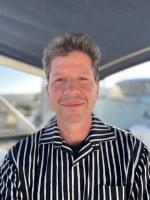 Andrés Reséndez is the author of the new book Conquering the Pacific: An Unknown Mariner and the Final Great Voyage of the Age of Discovery. His other books include The Other Slavery. He is a professor of history at the University of California, Davis.

Q: What inspired you to write Conquering the Pacific?

A: I was first drawn to the figure of Lope Martín, an extremely capable Afro-Portuguese mariner who was able to climb through Spain’s sixteenth-century naval hierarchy in spite of his skin color to become a licensed pilot, the highest occupation to which a “mulatto” like him could ever aspire.

I also knew that he had been the first mariner to go from the Americas to Asia and back, thus opening the immense Pacific for contact and trade.

Finally, I vaguely knew that the Spanish Crown had secretly condemned him to be hanged as a repayment for his services, but Lope Martín learned about his impending execution while piloting a follow-up, re-supply ship and organized a mutiny in the middle of the ocean to save himself.

A: I had to do research in Mexico, Spain, Guam, the Philippines, and various repositories in the United States.

Rather than covering a broad time period and an extensive geography (like my previous book), this project was focused on a single expedition in 1564-65, so it required the proverbial looking for 16th-century needles in various haystacks.

I was very surprised by the number of mutinies and rebellions during the early explorations. Columbus, Magellan, and many other captains across both the Atlantic and the Pacific suffered a variety of mutinies and plots.

This may have been a learned behavior on the part of the early crews, passed from one to the next, as well as a survival strategy. When following orders seemed wrongheaded or suicidal, it was only natural to revert to a small group of like-minded individuals. 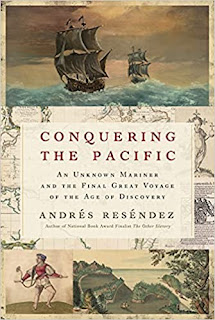 Q: What do you see as the impact of Lope Martín's and Andres de Urdaneta's voyages, and how was each viewed in his time?

A: Martín and Urdaneta in effect opened up the Pacific. After their momentous expedition of 1564-1565, for two and a half centuries, Spanish galleons sailed yearly from the coast of North America to the Philippines, carrying silver to Asia and returning with silk, porcelain, spices, and other wondrous products.

By the 18th and 19th centuries, British and especially American merchants built on these early linkages to launch their own transpacific ventures. As the Spanish empire in the Americas crumbled in the early nineteenth century, American ships replaced the old galleons.

Eventually, the United States seized Hawai’i, Guam, and the Philippines, tapped into markets in Japan and China, and established a network of interests that is now once again remaking the world.

Q: The subtitle of the book refers to "the final great voyage of the Age of Discovery." How would you define the age of discovery, and what do you see as the legacy today of this voyage?

A: I use the term “Age of Exploration” broadly and as a placeholder to refer to the many voyages and ventures of discovery that revealed, particularly to Europeans, large swaths of the world around the 15th and 16th centuries.

In Conquering the Pacific I try hard to give readers a sense of the stunning nautical innovations—a collective enterprise of a few generations of pilots, mathematicians, map makers, instrument makers, etc.—that finally allowed mariners to track their position while in the middle of vast bodies of water and cross entire oceans at a time.

A: These days I am researching the fallout from that 1564-65 venture. Just as Columbus's voyages triggered a major transfer of plants, animals, and germs across the Atlantic, so did the opening of the Pacific create a biological corridor across the largest ocean on Earth with very significant but little-understood consequences for the world.

A: I believe that sums up the book and its context!